This was signed by the Modeler that designed this piece, by the name of GIUSEPPE ARMANI. His designs of Figurines were made by many companies in Italy and were signed using either his full name (as in your case) or using his initials. Armani porcelain figurines are very collectible. To see another version of this mark, please use our NAME SEARCH for Armani.

Most of Armani's porcelain designs date ca 1960s - 2010s and yours was probably made in the 1980s. The other mark that looks like an imitation of the original Capo-di-Monte mark, is quite generic. As you know, many companies used some sort of variation of this Crowned N mark with slight differences and not only in Italy. In this case, this was probably from one of the various porcelain factories or studios around the Nove region of Italy. Please use our NAME SEARCH for Nove to see several examples of marks used by these producers.

The Pitcher is in the style of much older Staffordshire (UK) and, a bit later, of Ohio Valley Potteries that produced mostly Utilitarian items, but in an elegant form. Unfortunately, neither of these two pieces date or originate from those turn-of-the-(previous)-century kilns, but rather from a much more modern and recent factory, most likely located in the Far East or similar country. Many of these are sold through Dept. Stores, usually in Sets, for example at Target, Macy's, Pottery Barn etc. The most tell-tale indication that this is the case is that the Gilding (gold coloring at the rims and other areas, as well as the mark itself) would normally fade after a few decades, especially if used as intended.

I can assure you that these are fairly recent imports and probably also had a sticker or label with the country of origin as required since 1891. The mark is not documented or registered, but is typical of companies from Asia. Pretty pieces, but not antique and mostly nice for decorating around the kitchen or at a country home.

As you probably already know, this type of Asian Foo Dog is also called a Shishi and it's actually a Lion. The mark is a generic version of marks from the KUTANI region of Japan and there are no indications as to an exact studio or factory that made it. If you use our NAME SEARCH for Kutani, you will see this and several other examples. On the same page you can also find a brief Fact Sheet on Kutani potteries & factories in general.

Because this type of mark as on your piece has been used for many decades, the best clue is the little paper label or sticker, which although is probably an Inventory Number and not unique to any specific company or exporter, in this style it was used ca early 20thC and so it dates your item to probably ca 1900 - 1930s. Lovely Celadon-like glaze and true representation of what it depicts. The brush stroke over the mark is just some glaze to protect it while in the Kiln as the rest of the base of this item does not seem to be covered. It has no other significance.

The ROYAL SATSUMA mark in many formats and variations, is very generic and was used mostly by Far East-based exporters or US-based Importers on items from both China and Japan. As you know, Satsuma is a region in Japan [please use our NAME SEARCH for Satsuma to learn more], but this style was imitated and produced also by the Chinese. Your vase has some "moriagi" features (raised dots), a characteristic of Japanese porcelain decorative detailing, but again, this has also been imitated. It could be either Chinese or Japanese, most likely Chinese, and dates ca 1960s - 1970s.

This is one of several variations of marks used by a multitude of porcelain factories in the JINGDEZHEN area of China. Although some sources say that the numbers represent the "Factory", they also used Latin letters and other symbols. In our opinion, they are Inventory or Series references. I do not know how many actual factories or smaller studios are currently in operation in this city, but they have one of the strongest traditions in making porcelain sine the early 18thC, so I would imagine that there were more than 100 independent factories at one time or another, and even this number is probably a very conservative estimate. Your lovely and characteristically Chinese Tea Set dates quite recently, probably ca 1970s - 1980s.

This seems to be a Pedestal Urn and most probably depicts Helios, ancient Greek God of Sun, later regarded as one and the same as Apollo (in this depiction, also wearing the Starry Robe of Night). This particular array of four horses pulling a chariot is called a Tethrippon or Quadriga and is a common representation in reference to a Godly (deity) or ultra-heroic figure in antiquity and still used today in several European monuments. The overall Urn appears to be in imitation to ancient classic Greek & Etruscan vases or urns, down to the choice of colors of crimson, black and gold, and with only a few extra artistic embellishments in its design details.

For this reason, I am practically certain that its origins are from Continental Europe, most probably France or Germany and most likely dates ca mid-to-late 19thC. The word "PATENT" in English around the star mark probably indicates that this was destined for export and the lack of the country of origin (required only after 1891) makes it pre-1890s. Additionally, using staples to repair porcelain is a fairly old technique, so even the repairs probably do not date any later than 1920s. My personal opinion is that it originates from one of the numerous old PARIS PORCELAIN decorating studios - see: Paris Porcelain marks. Part of the reason I believe so, is that the number 2 is written in a manner typical to France and some other countries in Europe. Provided that this "2" is not simply a Model Number, it is possible that it is indicative that this is one of a pair. The mark is not registered nor documented in any of our numerous resources, but this may be explained by the possibility that this is the Exporter's or Fine-Retailers' logo rather than the actual maker's, in which case this item (or the pair) could have been made "to order", i.e. subcontracted, a very common practice at that time and also later.

This is definitely English from one of the several potteries located in Staffordshire, UK. The red hand-written numbers are a Model Number or other internal manufacturing reference, but not unique to any particular company. It was probably used as a Fruit Bowl and can nowadays be used as a Salad Bowl. It is in the distinct Chinoiserie style, an imitation of older Chinese Export porcelain items - see our articles: Chinoiserie porcelain marks and Chinese Export Porcelain to learn more. Nice piece and the silverplate rim reads EPNS (ElectroPlated Nickel Silver) and has the mark of the maker which would be included in our Silver marks guides. Electroplating did not exist prior to mid-to-late 19thC and as mentioned above, the country of origin was required after 1891. Therefore, this item dates ca 1870s - 1880s.

This number next to the mark is referred to as the "Painter's Number" and was specific to an individual artist that worked at their facility. This particular format (in blue and to the right of the wavy lines) was used only between 1900 - 1923. If it also had a green number to the left of the wavy lines, it would have dated between 1924 and 1934 and so on. The notation format on your piece is consistent with the making of this plate in 1908 as noted. Unfortunately, and although many Artists' initials or marks have been documented as used on different or later pieces [see our NAME SEARCH for Royal Copenhagen to view several examples], these numbers like on your piece were not listed or recorded.

This is absolutely genuine and you will find a practically identical mark in our database. In addition to their normal production of Tableware, Chinaware, Decorative Porcelain or Earthenware, this company also engaged heavily in making ceramic parts for other companies to be assembled with other components (such as brass or silver, as in your case) and be used for whatever purpose the buyer wanted. In other words, they acted as a "parts supplier" to many companies that made all sorts of other things. For example, we have seen their marks on numerous porcelain bases for Lamps and porcelain little pots for Ink or Desk Sets, which were assembled and sold by others. The number on your piece is simply an internal reference or "Model Number" related to this particular customer, but it is not unique or specific to this or any other company. 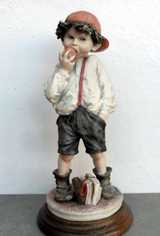