There is no word in English for Chinoiserie. We define it as a type of decoration which had its greatest vogue in the eighteenth century and which was described by contemporaries as being "in the Chinese taste;" we also apply the word to articles made in that style. But no single word or phrase in the language evokes as well as Chinoiserie that fantastic world worth taking a closer look.

China has always pulled at the imagination of Westerners. For long ages, caravans made their slow and painful way across central Asia to bring back rich and wonderful cargoes. Before the middle of the seventeenth century, maritime trade routes had been established by the great mercantile companies of Portugal, England, Holland, and France and Oriental porcelains, textiles, and lacquered objects were finding their way into all the countries of Europe.

This influx of trade goods had far-reaching effects on European manufacturers. The potters of Delft, Rouen, and Nevers imitated with their tin-glazed earthenwares the earliest blue and white Ming porcelains imported into the West. The secret of true porcelain was rediscovered at Meissen after long efforts in the course of which new ceramic bodies were created. The technique of japanning, described in John Stalker's ‘Treatise’ of 1688, simulated the effects of Oriental lacquer; it was improved upon, within a century, by the famous Verms Martin. Costly painted silks and wallpapers brought from China were copied in Western factories.

The exotic imports which stimulated experiment in techniques and materials also spurred the imagination of designers and decorative artists. Painted scenes on Chinese porcelains, screens, and wallpaper offered them fresh and fascinating models. But as might be expected, these landscapes and temples, plants and animals, costumes and accessories of outlandish aspect were not always understood or rendered literally by the Occidental copyist. The elaborate zig-zag paling that enclosed a Chinese garden might come out as a jagged ("thunder and lightning") line on a Delft plate. And the little pigtailed figures going about their incomprehensible occupations in their fantastic robes made them look even more exotic. Yet, in spite of the interest of savants and philosophers in the life and thought of the East, the general public was indifferent both to the real nature of Chinese life and the true spirit of Oriental art. It was the unexpected, the unheard-of, the quaint and curious that appealed to the times, and the motifs of the painted porcelains often served only as a springboard for the flight of fancy.

A wealthy and pleasure-loving public, reacting perhaps to the restraints of classicism, was asking for novelty and charm in its surroundings. The rococo style that emerged about 1730 in France reflected this mood in its exuberant curves and incessant, flame-like movement, its interest in nature and impatience with symmetry, and Rococo often spoke with a Chinese accent. Pigtails, pagodas, and parasols may turn up among rococo scrolls and rock work; a Harlequin sometimes puts on a mandarin's robes, and a Cocumbine poses with a fan before a vase of flowers. The new spirit pervaded almost every branch of the arts, and we may see "the Chinese taste" expressed in architecture, landscape gardening, and town planning, in textile, ceramic, and furniture design up to the last decades of the eighteenth century.

France, one of the first European countries to feel the influence of the Orient, played an important part in the spread of the new style. Though her own commerce with China was established relatively late, she had a special pipeline, so to speak, to the Celestial court itself through the French Jesuits who enjoyed confidence there, and the picture of Chinese life they relayed inspired the Chinese masks and spectacles at the court of Louis XIV. The celebrated porcelain tower of Nanking described in one of the early Jesuit relations was counterfeited in stucco and faience at the Trianon. This construction had its own imitators, erected by the German princes at Pillnitz, Potsdam, Vienna, and elsewhere. The public pleasure gardens of Paris boasted their Chinese pavilions, their arched bridges and Chinese junks on the river; London followed suit with the great pagoda of Kew.

The eminence of French manufactures, which commanded the talents of leading artists, also contributed to the success of the Chinese style. Boucher designed a set of tapestries with Chinese subjects which were ordered from Beauvais for presentation to the Emperor Ch'ien Lung. Philippe de Lasalle created Chinese motifs for the silk looms of Lyons. The toiles of Jouy, printed with Chinoiseries by Huet, went all over Europe and were imitated in England, Spain, and Italy. Jean Pillement of Lyons (1728-1808), by giving the style its most charming expression, made his name almost synonymous with chinoiserie, and it was expressly for the makers of textiles and furniture, the potters, printers, and metalworkers of the time, that Pillement published his ‘Flews Ideates’, his ‘Barques et Chariots Chinois’, his ‘Parasols Chinois’, his exotic idylls of Chinese fishermen and children at play.

The charm of that never-never land of Chinoiserie whose aerial architecture defies the law of gravity and whose inhabitants in palm-leaf hats teeter along under enormous umbrellas, play their mandolins, or smoke long pipes before their pavilions, climb rustic staircases into the treetops or do battle with dragons and oversized butterflies, was perpetuated in the most diverse materials. The porcelain factories of Meissen, Nymphenburg, Sevres, Chantilly, Capodimonte, Chelsea, and Worcester, the faience makers of Lambeth, Staffordshire, Rouen, Marseilles, and Strasbourg, among many others, interpreted the Chinese style with vivacity and resourcefulness, decorating their tablewares with pseudo-Oriental motifs of infinite variety and modeling in the round delightful little figures of Chinese mandarins and ladies, musicians, and smiling idols.

Our www.marks4antiques.com (see marks4ceramics section) has compiled and tabulated the most complete and comprehensive reference library of marks and symbols documented or registered by makers of Chinoiserie Porcelain & Oriental Pottery or Chinaware. Our NAME SEARCH enables super quick access to marks for each company on one page and also includes Fact Sheets with useful information that you can use in your research. Our GALLERY SEARCH uses a pictorial and visual method of displaying all marks & trademarks divided by Shape or Letter for fast identification and accurate attribution. Marks in a foreign (non-Latin) alphabet, are listed separately under our "NON-LATIN LETTERS" Shape Category and are easy to visually compare with the marks on your porcelain treasures and identify them properly. You do not need to speak or read Chinese, Japanese, Kanji, Kana, Katakana, Hiragana or any other language to identify your porcelain marks on items from the Far East, whether modern or antique. Our lists and databases are constantly updated and our specialists remain on standby to help with any questions to our members at no extra charge.

The art of the silversmith had, long since, responded to Oriental influences in various ways. The first precious porcelains to be brought into the Western world were often set in mountings of silver or silver gilt. The decoration of the silver "Monteith" punch bowl made in London in 1685 represents an early and interesting type of Chinoiserie found in English (and some American) silver. Bronze was another material in which craftsmen carried out decorations in the Chinese taste.

Furniture design naturally followed the fashion presenting carving, painting, and lacquering in Chinese motifs. Chippendale, that practical businessman, is quoted as writing, "The main object is to induce gentlemen to buy. If their taste runs to the Chinese now in vogue, here is an assortment of frets from which to select." The familiar term, Chinese Chippendale, is misleading in so far as it suggests that Chippendale was the inventor of English chinoiserie, but it does serve to remind us that the style was in favor all during Chippendale's period and that he contributed to its enduring popularity. Along with Chippendale, Thomas Manwaring, Ince and Mayhew, and Edwards and Darly published furniture designs in the Chinese taste in England.

Architecture bowed to the same vogue. Such publications as William and John Halfpenny's ‘Rural Architecture in the Chinese Taste’ and P. Decker's ‘Chinese Architecture, Civil and Ornamental’ offered designs for an "honorary pagoda," an "umbrellod seat," an Oriental banqueting house or a fretted paling to "embellish the prospect" of a gentleman's grounds. The Chinese style of landscape gardening, as it was exemplified in Sir William Chambers' designs for the gardens at Kew, represented the triumph of naturalism over the formal rigidly symmetrical arrangement of Le Notre.

There is a distinction to be made between Chinoiserie and ornamentation which is simply copied, more or less exactly, from that on Chinese textiles, porcelains, and other sources. The decoration of many eighteenth-century English ceramics, for instance, falls into the latter category, but it is not always easy to draw the line. Another division sets apart all those trade wares made in China for the Western markets. Oriental export porcelain is an example that comes readily to mind, and there we can point out in many amusing instances how the Chinese artist did no better by his European subjects than the "foreign devils" did by him. We should also note in passing such variations on the Chinese theme as the ‘sineeries’ in which monkeys replace human figures in a typical chinoiserie setting, or that even odder melange of seemingly disparate elements known in its time as "Chinese Gothic."

By the 1760's the Chinese taste appeared to be going out. Horace Walpole wrote of a friend who had given up his Chinoiseries for the more austere effects of the true Gothic, "His every pagoda has taken the veil." But the 1820's and 1830's saw a recrudescence of the style, which was employed in the decoration of part of Brighton Pavilion (1824). Regency Chinoiserie has little of the delicacy of eighteenth-century design, and it often runs to gaudy colors and bizarre effects. But in well-chosen examples, we may still admire that sprightly invention which is the very soul of the movement. 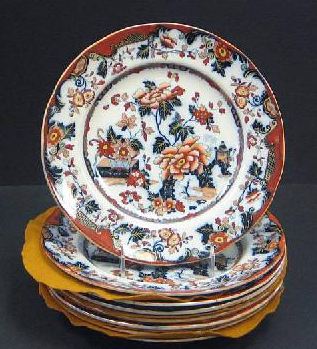