ROYAL VIENNA AND THE BEEHIVE MARK

See examples from our Pricing Guides

If you are like me and love fine porcelain, I am sure that my frustration when finding a great piece with the “beehive” mark is all too familiar. Over the years I have seen so many versions and on so many lovely pieces, it is hard to keep those creeping doubts from screaming at you: Fake!! Fake!!

Especially when coupled with the words ROYAL VIENNA, with or without the beehive mark, it is enough to drive you crazy and swear that you’d never buy another one of those ever! So… I did a lot of research and decided to share what I know in the hopes of keeping at least some people sane…

It turns out that the term Royal Vienna and the “beehive” mark occur frequently on fine Porcelain & China pieces, mostly on items of decorative appeal. Yet, in our research, we have often found that there are several meanings attached. To begin with, there is not and never was a company or factory called “Royal Vienna”. Many Collectors have used this term to refer to the “Imperial & Royal Porcelain Manufactory" in Vienna, Austria, and in operation ca 1718 - 1864 only. However, Royal Vienna was not their official name. In addition to their legacy for stunning Porcelain Artwork and Ceramic masterpieces, one other involuntary contribution made to today’s Collecting world is their famous “bindenschild” mark meant to represent the Royal Shield found in the center of the Royal Crest of the Hapsburg Royal Family, who mentored and financed them. This symbol, known as the “beehive” mark in English-speaking countries because of its resemblance to a normal beehive when upside down, is the second most copied or imitated Porcelain mark in history after Meissen’s Crossed Swords.

As mentioned, it is true that some Collectors refer to pieces made by the original Imperial & Royal Porcelain Manufactory as “Royal Vienna” and use this term as an abbreviation. However, it should be pointed out that this term is also being used by others to refer to the style of certain items, not necessarily their origin or maker. For example, most classically-themed Decorative Plates that have a “beehive” mark and made ca 1880s – 1940s, are often called “Royal Vienna Plates”, but in this case, when applied correctly, the reference is to their style. Therefore, when someone proclaims a piece to be “Royal Vienna”, the obvious question should be “do you mean from the Imperial & Royal factory period or made later in that style?”

If it is an original Imperial & Royal Manufactory piece, the authentic beehive mark is never symmetrical and always underglaze in blue or impressed [more signs and ways to distinguish these marks are also included in Rontgen’s book]. However, this is exactly where more doubts creep in… There are so many copies and imitations of the beehive mark, it can make your head spin. Not only was this mark forged almost immediately upon the original factory being auctioned off by the King because of financial difficulties, but this mark is also found to be used in several variations even to this day, sometimes by Trading companies or Importers. A word of caution: many pieces that used a copy or imitation beehive mark are not necessarily of poor quality. In fact, the vast majority of these later Royal Vienna pieces, especially those made ca 1870s – 1950s, are of high workmanship and usually command high prices. Most were made at reputable Studios and by accomplished Artisans, usually in the Bohemian region of Europe, but also in England, France, Italy etc. Many of these “copy” marks have been well documented and attributed to various makers by Ceramics Historians in several books and websites.

Most beehive mark copies are fairly easy to tell apart as each specific Artisan or Studio used a different variation. Although most ca 1870s – 1930s marks were applied by hand, so some may vary ever so slightly from item to item, there are usually one or two details that help in attributing them accurately, especially with the help of a book or website – for example, see our own marks4antiques.com research website.

Some of the more recent uses of the beehive mark are applied by stamp, usually in an industrial manner. For example, ARNART IMPORTS (in business ca 1957 – 2001) who imported fine porcelain & china from Japan and to a lesser extent Italy, used a beehive mark. However, Arnart Imports’ mark is documented as being exactly symmetrical, usually in black, and having a tiny vertical line at the very bottom of the beehive and sometimes a dot right above [see photos] and is easy to tell apart from others.

Recently, and perhaps because Arnart Imports’ items have now gained a good reputation for quality amongst Collectors, it appears that several similar marks are now being used by Trading companies and other Importers from China and elsewhere. These much newer items are sometimes also of good quality. In case it helps, most of the very recent Chinese beehive marks we have seen tend to be a bit more rounded.

Hopefully the above, along with a book or a website reference – and plenty of experience – can help in guiding you to more splendid treasures of “Royal Vienna” 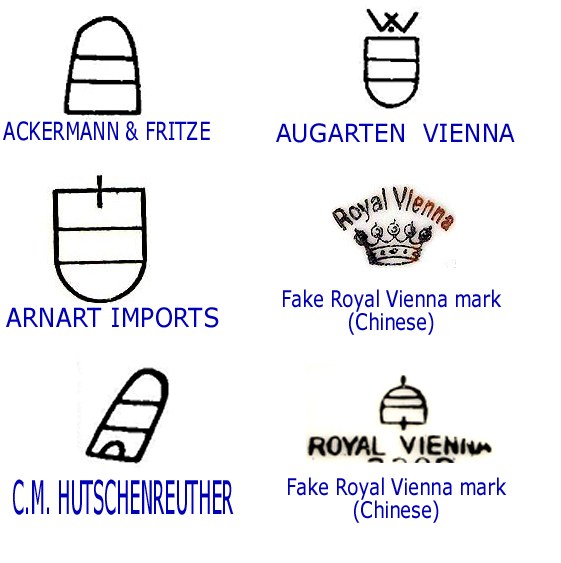 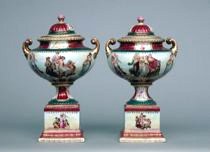 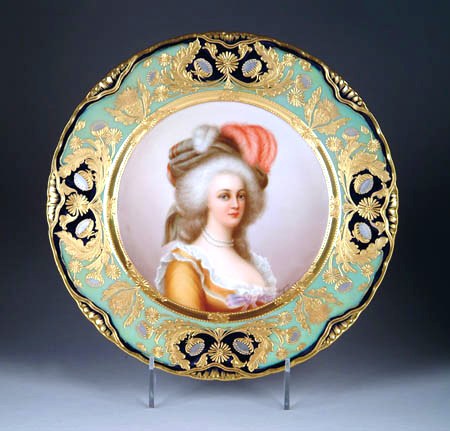