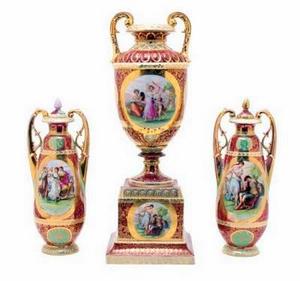 ROYAL VIENNA is the generic name given to items made in a particular decorative style reminiscent of Renaissance paintings and sculptures. Strong elements of Greek Classicism are almost always present and the color palette seems to be dominated by soft hues and romantic vibrancy. In this article and in the context of antiques & collectibles, Royal Vienna appears mostly in the form of Porcelain such as Portrait Plates, Urns & Vases, and elegant Chinaware. Most bear a likeness of what is widely referred to in English-speaking countries as the beehive mark, which is actually an upside-down representation of the original bindenschild or Royal Shield found in the center of the Royal Crest of the Hapsburg [or Habsburg] Royal Family of 18thC Vienna, Austria.

The Hapsburg Royal Family mentored the Imperial & Royal Porcelain Manufactory in Vienna that lasted between 1718 to 1864. They produced exceptional porcelain second to none and equivalent in quality and artistic craftsmanship to their major contemporary competition such as MEISSEN and SEVRES. Original and authentic Royal Vienna porcelain from the Hapsburg era are now found only in major Museums and very fine private collections. The vast majority of items we now call Royal Vienna were made ca early 19thC onwards by many companies around the world.

The original and authentic Imperial & Royal Vienna "beehive mark" on porcelain is never symmetrical and always underglaze in blue or impressed, with very few exceptions. However, the most common beehive mark used on items in the same style, but made ca 19thC onwards, appears in all sorts of variations, sometimes with the English words for "Royal Vienna" as shown in our Ceramics marks guides. Many of these beehive marks are characteristic enough and well documented so that they can be accurately attributed to specific companies or porcelain decorating studios. Yet, some are very generic and are often observed on Importers' logos and trademarks, without any particular reference to the exact studio they came from. In either case, most have also been tabulated as to at least their age and general region of origin, mostly Europe. Our Ceramics Guides also include marks found on the numerous very recent reproductions of Royal Vienna styled porcelain made in China and other Southeastern countries.

The vast majority and most desired Royal Vienna porcelain items are those made around 1870s to 1930s. This period witnessed the peak of their production by hundreds of companies & porcelain studios. Most of these companies & studios were located in Austria, Germany, France and the general region of Bohemia (Central Europe). For some unknown reason, English & Italian makers, who also had a very developed porcelain industry at that time, did not actively participate in the fray of producing pieces in the Royal Vienna style, at least not in any appreciable numbers.

Auction prices for Royal Vienna porcelain are usually high and consistent. The popularity of this style remains robust and older pieces may easily fetch several hundreds of US dollars. Some examples from our Antiques Price Guides are shown below.

Gilding and elaborate border designs, and sometimes even Ormolu or Metal Mounts, were frequent decorative details that enhanced the superb painting and colors on Royal Vienna antiques. Almost all Royal Vienna porcelain was meant primarily for display and adoration, with the notable exception of some super-fine chinaware, that most likely is used quite rarely and on very auspicious occasions. Some of the painted features, especially on Royal Vienna Portrait Plates were signed by an artist, most often on the front and visible side. However, many of these artists' names are either undocumented or utterly fake, sometimes referring to real artists who however were active painters on canvas many decades or a century earlier. A fairly common example is for the Neoclassical painter Angelica Kauffman [1741 - 1807], whose signature seems to be present on many Royal Vienna Plates made ca 1890s - 1920s. This example is indicative of the fact that most of these signatures were more of a reference to the artistic style, as in "after" Kauffman, rather than trying to tell us that these items were actually hand-painted by the same or similarly famous artist.

A ROYAL VIENNA PORCELAIN TRAY, having a courting couple at the...

Pair of Large Royal Vienna 2 Handled Vases. Both with covers and...

ROYAL VIENNA PORCELAIN: 2 pieces to include 1) Vase on pedestal, 2...

541. A lot of Three Cabinet Plates