Appraise and find values for
A 1930's eight day mantel clock with rectangular... 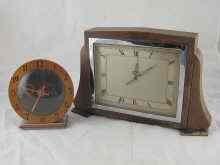 A 1930's eight day mantel clock with rectangular chrome bezel in oak case. 19cm high and an early Temco electric clock manual start circa 1930 with copper... [this item is NOT for sale]