In this case, your gold ring is marked with the standard Hallmark used in Italy ca mid-20thC (see our "Recognizing Country Hallmarks" page through our EXTRA HELPsection to see examples under the Italy portion) and the AL notation refers to the initials of the Province it was Assayed & Hallmarked.

In this instance, These AL initials refer to Alessandria, a region in Italy where many accomplished Jewelers & Silversmiths had set up their operations since the late 18thC to Present.

The number 1772 is probably the maker's registration number, but these records are not available for all Artisans and we could not find any specific matches for this particular number. If there are any other initials for the actual maker, please let us know. However, in most cases, this is often less significant since many of these fine pieces were made to order for a client or as a one-off piece for display and sale at their Retailer's shop.

As I am sure you know, the 750 refers to its precious metal content. If Gold, this translates to 18K in the "Thousands" notation used in several European countries, i.e. 75%.

This is indeed a stunning piece and shows remarkable detail. You are correct in that it was made during the Austrian-Hungarian reign of the Central European region of Bohemia. This particualr format of the Lion's Head was one of the official Assay Hallmarks for this region from 1886 to 1922, although it was still in use until 1937 by some Jewelers & Silversmiths. This dates your item to ca late 19th - early 20thC.

The style of this Brooch is characteristic of the region during that period and has some elements of Art Nouveau, although not strictly speaking, and incorporates various materials, incl. Pearls and Enamels, with elaborate detail.

The AM initials are those of the Jeweler or a Retailer's. There were several registered and/or documented Jewelers & Silversmiths with these initials during that time in the region, so we are not certain of the exact match. Here is a list of Austrian Jewelers & Silversmiths with these same initials who also worked during that time (I have only listed those that are the most likely to have made your piece):

However, the maker may have been registered in Hungary, whose records unfortunately are not well documented.

these are indeed "Sterling", which means different things in different countries [see our "Units" and "Glossary" pages through our EXTRA HELP section].

Here is how to read these marks, from left to right as pictured in your photo:

Definitely ROBINSON & Co. The S letter next to the maker's initials and after the little "Star" symbol refers to Sheffield, i.e. the location of this company. Your lovely Silverplated Cruet Set dates ca 1890s - 1910s. Nice simple design, with elegant punched pierce work where the bottles or jars are inserted, most likely for everyday use. You can see other versions of this mark by using our NAME SEARCH for Robinson.

The sideways mark to the very right, which is only partially visible, probably reads EP for Electro-Plated. To learn more, please see our articles STERLING SILVER & SILVERPLATED ANTIQUES: Understanding Sterling Silver or Silverplate and related terms and SILVER & SILVERPLATE DURING THE VICTORIAN ERA.

To decipher the marks: Go to the "Recognizing Country Hallmarks" page and scroll down to the part where it shows the Netherlands (Holland) Hallmarks. Yours is the Lion with the No. 2 and the Key, which means that it is of Dutch origin ca 1853 - 1953 and the Key indicates that it was destined for Export. The Minerva head indicates that the Tax (or Duty) was paid. This mark was used ca 1814 to 1953 with a letter in the helmet and again in 1953 onwards with a number to denote the city of origin (not clear in your photos, but definitely a letter since it was made prior to 1953 - see below).

The "e" letter in this exact format is the Date Letter notation used in Holland and in this case refers to the year 1864, which dates your item. We can see no maker's mark, but that's not unusual on items made for export from that country as it was probably made to order (subcontracted) for some unknown Dutch Exporter or a US or UK -based Importer in mid-19thC.

This is a Pen Tray, part of a Desk Set, in the Art Nouveau style and most probably made of either Brass or Brass-layered Copper. Based on its distinct style and other elements, we are practically certain that it dates ca 1900 - 1920s.

The top three letters are DEP. In general, these initials stand for the French word DEPOSE, which means "Registered", but it was also used on items made in Germany, where these initials have the same meaning and refer to the word DEPONIERT ("registered" or "copyright"). In my opinion and based on the distinct style of this item, I believe it originates from France.

Although not precisely known as to its exact maker, the characteristic style, age, origin and utility of this item make it desirable to collectors of Desk Sets. To see some representative values on related items sold at auction from various known and unknown manufacturers, please use our Antiques Price Guides and search for "Brass Desk Set".

The three symbols are a Lion or some sort of a Griffin, then the letter C or a Crescent, and then another Lion. For future reference, you will find this mark under any of the Shape or Letter Categories for these symbols.

This item was actually made by CRESCENT SILVERWARE MFG Co., who were later acquired by KIRK & SON. They used this mark between 1922 and 1977, so your Teapot was made ca mid-20thC. It is silver-plated on Copper.

This mark was used as a Census notation in Czechoslovakia on old Austrian Silver items in 1922. This was a frequent practice ca mid-19th - early 20th centuries as borders of countries kept constantly changing due to various wars and new Treaties.

As you know, at that time, and in fact until very recently, Precious Metals such as Gold, Platinum or Silver were the "guarantee" of a country's Currency Reserves (similar to the Federal Reserve in the US today), and after almost every war, there were massive nation-wide inventories taken to assess the value of Precious Metals reserves in the country in order to print money that would be internationally recognized and assured, known as the "Gold Standard" Monetary System. Items inventoried in this manner were pucnhed with a

As best as we can tell, this mark on your lovely Bronze Flatware is a typical representation of the Thai Buddha, which indicates that these were made in Thailand. The most famous and prolific company that makes these is called ROYAL LAPIDARY Co., Ltd., and is most likely the manufacturer that made your Set. These are usually made of Nickel-Bronze (an alloy that contains up to 30% Nickel).

Your Set probably dates ca 1980s - 1990s, it is not antique, but still quite elegant and exhibits some Modernist (minimalist) design elements. The outer box was probably made to order (outsourced), so in this case the "LION" text-mark is not relevant, but typical of Thai manufacturers' names.


To use our huge database of Silver & Jewelry makers' marks and hallmarks, including marks on other Precious metals, Pewter and other collectible Metalware, please see our Silver & Jewelry or Pewter Marks Identification Guides. 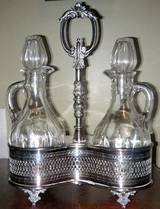