STERLING SILVER AND TYPES OF SILVERPLATE

In general, the term STERLING SILVER is meant to distinguish items that are composed of mostly solid silver as opposed to SILVER-PLATED (or silverplated) that have only a thin surface layer of silver. However, there are several other distinctions, some using terms that can be confusing and often lead to a misunderstanding of an item’s composition and hence its value.

One of the most important metallurgical terms that are also used for silver, whether antique or new, are the words ALLOY and PLATED. Alloy refers to a composite metal that consists of two or more distinct pure metals that are fused together so as to make them inseparable by mechanical means. Plated on the other hand, refers to metals that have a layer deposited and adhered to a Base Metal to give it the appearance that the entire item is made of the same material used in its plating. The base metal for most silver items in today’s market is usually Copper, Nickel Silver, Stainless Steel, Brass, or Bronze.

Sterling Silver is actually an Alloy. Because silver is soft in its purest form, silversmiths and jewelers mix silver with copper to make it harder and more durable. Additionally, copper gives the resulting alloy a nicer sheen and is more appealing. This is how the Fineness or Standards or Assay Hallmarks used on silver have come to have different meanings as each country considers certain levels as minimum standards (some changed over time) and are usually enforced on jewelry and silver items. For example, in the United States, the first legal Sterling Silver standard was introduced by Charles Tiffany in 1852 and was soon adopted by the US Federal Government as 0.921 parts of Silver and 0.079 parts of Copper. In the United Kingdom, the Sterling Standard was established much earlier, in 1238 (enforced after 1300), and refers to a minimum of 0.925 parts of Silver and 0.075 parts of Copper. Items made of at least 99% pure silver are usually referred to as FINE SILVER. In America, COIN SILVER refers to a minimum of 90% silver content.

It is interesting to note that, in spite of its name, Nickel Silver does NOT contain any silver. It is actually an alloy of copper, nickel, and zinc in varying proportions, usually 2:1:1 or 3:1:1. It is similar to the Chinese Paktong as imported to Europe prior to the 19th century and until nickel was more readily available from various colonies. In the west, it was developed first in Saxe-Meiningen, Germany, in 1824, hence its other name as German Silver. However, Nickel Silver is used extensively as a base metal on silverplated items hence the common abbreviation EPNS (Electro Plated Nickel Silver) or EPGS (Electro Plated German Silver).

Which brings us to Silver Plating…

A very successful method of silver plating was Sheffield Plate, which although already known since antiquity, was formally patented for industrial use by Thomas Bolsover of Sheffield in 1742. The initial name for this method was Copper Rolled Plate, which refers to the basic technique employed at the time of rolling a layer of silver onto a layer of copper, sometimes on both sides. This produced a very compact and large silver sheet, usually rolled in ingots, that was still thin enough to be malleable for the silversmith when forming intricate designs. The term Sheffield Plate became popular ca 1770s and was later referred to as Old Sheffield Plate to distinguish it from other methods developed after 1830s. Initially, the majority of Sheffield plated items had the base metal covered on the external side only (Single Plated) whereas the other side was covered with Tin. However, market demand for Double Plated items, especially on hollowware was soon evident and most specimens surviving today as antique Sheffield Plate are double plated.

Because of repeated increases in UK's taxation for Solid or Sterling Silver during the period between 1784 to 1815, other promising methods of silver plating were soon developed that were less expensive and easier to replicate in industrial quantities. Most of these techniques employed the use of fine and very thin layers of silver, sometimes referred to as Silver Leaf, that were pressed against the base metal 3-5 layers at a time and then heated and burnished to a smooth finish. Since it took a total of 40 or 60 Silver Leaf layers to get each item ready, this method was still laborious and expensive. This method is now known as French Plating because it was popular mostly with French platers during the 18thC. Other similar forms of silver plating were also developed around the same time, including Roberts Plate ca 1830, British Plate ca 1835, and Merry Plate in 1836.

However, the most important change in silver plating came about with the invention of Electro-Plating, a method that simply requires placing the item to be plated along with a small ingot of solid silver in a bath of mild acid and applying electric current. This set-up enabled an evenly uniform deposit of solid silver on the plated item, and varying the current and time during the process, allowed for very precise control of the thickness of the plated silver. Electroplating was first discovered by John Wright of Birmingham in 1840, but was officially patented by Elkington & Co. around the same time. It has since been in extensive use and has remained the dominant way of plating silver to this day. Most electroplated wares have a plating thickness of about 3 - 30 microns whereas Flashed or Silver-Washed wares have less than 3 microns.

Silverplated items were not required by law to have hallmarks. However, many companies used their own logos and often included the type of plating that was applied on each piece, usually as initials EPS, EP, EPNS etc. This practice eventually became the norm and now most silverplate found in the market is signed this way along with makers' trademarks. Unfortunately, some companies intentionally signed their wares with symbols that are very similar to authentic sterling silver hallmarks in order to gain market acceptance, commonly referred to as pseudo-marks.

Finally some other terms related to Silver include:
Standard Silver Plate: The equivalent of using 2 troy ounces of Pure Silver for every 144 Silver spoons being electroplated
Quadruple Plate: The use of 4 times the Standard electroplating amount of Pure Silver, i.e. 8 oz for every 144 silver spoons
Britannia Silver: A Sterling Silver alloy of 0.9584 Pure Silver Fineness
90g or 90G or G90 or 90 or Hard Plating: Refers to electroplating of over 30 microns thickness; found mostly on German Cutlery & Utilitarian Flatware ca 1920s onwards. 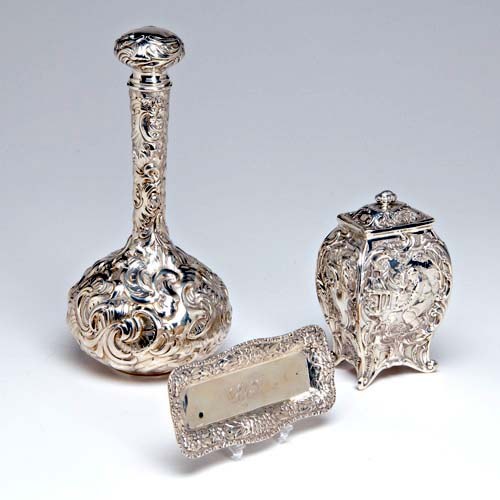