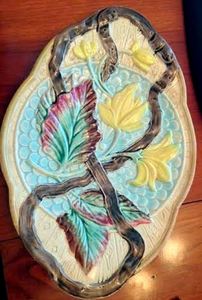 PALISSY and PALISSY WARE are antiques terms that refer to Majolica Earthenware & Porcelain or Art Pottery that exhibit high relief decoration and in various forms. Some are functional & utilitarian and some purely for display.

Specifically, a reference to PALISSY WARE describes items made by many Artisans & Pottery Studios inspired by the 16thC French ceramicist BERNARD PALISSY [b.1510 - d.1590], who pioneered lead-based & enameled pottery, now collectively referred to as MAJOLICA. Very few of his original pieces survive nowadays and those would be displayed in fine Museums.

PALISSY WARE is characterized by heavy Majolica (Tin) glazes in mostly deep greens, reds, yellows and other strong colors, yet elegantly diffused throughout the piece. High relief surface decoration is usually in the form of small animals, like snakes, lizards etc, or fish, shellfish and other sea creatures, fruit or vegetables & plants and other pronounced details. Serious initial attempts at reviving this style of Art Pottery begun in France ca 1840s by several potters and quickly spread to nearby countries such as Portugal, UK, Italy & elsewhere.

Most desirable and collectible PALISSY WARE were made ca 1850s - 1920s, especially items from the Tours (France) and Calda da Raihna (Portugal) regions. Later items are primarily of decorative value, regardless of origin, and are usually sold as souvenirs or tourist ware of no significant value to most collectors.

A cautionary note: PALISSY WARE is NOT related to PALISSY POTTERY of Longton, Staffordshire (UK), who did not produce pottery in this style. However, GEORGE JONES (also from Staffordshire, UK), created magnificent pieces in this style ca late 19thC.

Palissy Majolica spill vase, modelled with a monkey climbing a...