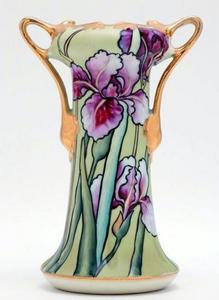 NIPPON is the official name for the country of Japan and it literally means "Rising Sun" as also attested by their national flag. It is NOT the name of a particular company or maker or artisan. By extension, NIPPON WARE refers to Porcelain & Chinaware from Japan. In other words, this term reveals the country of origin of these items, not their maker. Technically speaking, any chinaware or collectible porcelain that was made in Japan would qualify in applying this name; however, most collectors also offer a temporal distinction to this term as in using it only for items made before 1921. The reasons stem from a 1921 US official request on all imports from Japan to be labeled with the English name for the country, JAPAN, and was adopted immediately thereafter. Although this is an artificial separation, it is nowadays widely accepted as the standard way to refer to the two periods of pre-1921 as NIPPON-WARE and post-1921 as JAPAN-WARE. In general, items produced in Japan during these two periods were marked accordingly to reflect these labeling changes, with very little overlap in the early 1920s, which further enhanced the widespread adoption of these terms as a fairly accurate period description of collectible Japanese porcelain & chinaware.

Japanese porcelain makers & chinaware manufacturers rarely marked their products with their company or artisan names or logos. They were simply marked with the country of origin, most often in Kanji or Kana characters before the early 1920s and in English afterwards. Notable exceptions are companies that were heavily involved in Exporting these wares, for example NORITAKE (MORIMURA BROS, est. 1876), a mostly US-based Importers of porcelain & chinaware made by various makers in Japan, but who later begun producing their own items [after 1924]. Yet, there were some others, perhaps less prolific companies, but who also exported heavily to the US & Europe, and who also marked their pieces with specific and documented logos or trade names, such as FUKAGAWA [also known as KORANSHA, est. 1856 and still in business]. However, the very vast majority of Japanese imports were marked as either NIPPON or JAPAN and usually had the logo or tradename of their Importers.

Some individual potters or artisan studios, especially on artistic decorative porcelain or pottery, marked their pieces with their name or location of their studio. Some examples include ARITA, IMARI, KUTANI, HIRADO, SATSUMA and others. Marks for these items can be found in our Porcelain & Chinaware Marks Guides along with an indication of when they were in use and often with historical information that may be of interest to serious collectors. But in general, almost all other names we see marked or stamped on chinaware or porcelain from Japan refer to Trading companies, most of which were based in the US and some were an extension of high-end Retailers based in Tokyo or Kyoto, Japan.

Nippon Porcelain and practically all chinaware originating from Japan has always been and remains of the highest quality. The Japanese have been masters of porcelain making since the 16thC, primarily with the help of Korean potters who were invited to teach the locals in the industry of porcelain in places such as Arita and Hirado. Although the Chinese had invented the Kaolin + Petunse mix for making porcelain many centuries before that, some historians say as early as 100 BC, the Japanese & Koreans were the second such entrants in this Art world-wide and progressed much faster than their European counterparts, producing super-elegant and exceptional pieces that were destined for the Imperial court or similarly upper status families and Klansmen. The use of dyes and colors that adorned these pieces are delicate and full of symbolism. Mostly minimalistic, the blending of a few colors usually revealed a deep understanding of pure aesthetics, avoiding the application of obvious and busy designs that permeated the dominant decorative styles of post-Medieval Europe. These very old and original pieces are now extremely rare and can be seen mostly at major Museums or very fine private collections. Antique NIPPON-WARE and Japanese porcelain found in today's antiques Fairs or Auctions and through dealers were made ca mid-19thC onwards.

Many examples of NIPPON WARE are shown below. These are from our Price Guides and can help in appraising your own antique Japanese Porcelain or Chinaware treasures or collectibles.

THREE HAND PAINTED PORCELAINS. One is a Nippon berry bowl,...

TWO HAND PAINTED PORCELAINS. One is a decorative pitcher, painted...

A COLLECTION OF CHINESE AND LIMOGES PORCELAINS, 13 pcs. One is a...

NIPPON COLLECTION LOT: Lot to include 1) Hand painted teapot with...

NIPPON BLOWN OUT PLATE. Outstanding Nippon plate has blown out...

NIPPON Fine vase decorated in Coralene with yellow and orange...

NIPPON Fine vase decorated in Coralene with pink and russet...

NIPPON CORALENE VASE Decorated in an Art Nouveau style with...

NIPPON CORALENE VASE Of corseted form, decorated with a landscape...

NIPPON CORALENE VASE Of corseted form, having a cobalt upper and...