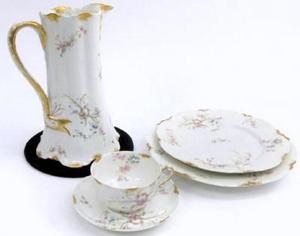 LIMOGES CHINA refers to porcelain chinaware & dinnerware made in the region of Limoges, France. Over the last two centuries, there have been more than 300 independent chinaware manufacturers and porcelain decorating studios that operated for a number of years, many of which are still in business. The vast majority of Limoges china is decorated with simple and elegant designs and are rarely gaudy or overbearing. The color palette of choice on Limoges china is usually in pastel hues and incorporate matching shades and tones that create a very pleasing effect that often appeals to even the most discriminating of tastes.

Although some Limoges companies, such as Haviland-Limoges, produced thousands upon thousands of chinaware and service sets, the vast majority of Limoges china manufacturers & studios had a limited output. A common practice in Limoges was also that many studios would purchase blanks (undecorated whiteware) from nearby Limoges china factories and then had them decorated by hand or using decals prior to sale. This explains why we often see two or even three separate Limoges marks on many items. In most cases, the dates that these Limoges marks were in use are close together. However, at times, some remaining inventory of a company that closed may end up being purchased in bulk by a Limoges Porcelain Decorating Studio at some later time, who then, in turn, decorated them and sold them a few decades after the original manufacturer produced them.

The quality of Limoges China is exceptional and rarely disappoints. Most Limoges porcelain is fired at high temperatures, which contributes to their durability and long life. Any subsequent decoration that is applied is also fully and carefully glazed, and while usually quite transparent and thin, preserves the entire item and prevents crazing or other age-related wear, even with frequent use over a prolonged time. For these reasons and obviously for their stunning beauty, Limoges China is the preferred chinaware or dinnerware in many homes. Additionally, Limoges China is not particularly expensive, especially as compared to other dinnerware of similar quality made elsewhere. This has expanded their popularity, especially amongst middle-class buyers who seek a relatively inexpensive alternative to other known pricey brands such as Meissen, Rosenthal, Sevres, Doulton etc.

The name of Limoges comes from the official name of the town and region of Limousine in France, located about 200 miles south of Paris. This region is also known as Haute Vienne due to the river Vienne that runs through this region. The presence of this river and the discovery of rich deposits of Kaolin at nearby Saint Yrieix, an essential element of making porcelain, attracted many Potters and Porcelain companies to establish their operation in the area since the 1770s. Historically, the first Limoges Porcelain factory was established in 1770 by Massie, Grellet & Fourneira, which however did not do too well financially and was forced to close a few years later. Limoges china from this company can now be seen only in Museums and is extremely rare. Nevertheless, other entrepreneurs and skilled artisans quickly flocked to the area and begun producing some of the finest porcelain chinaware of the time. This tradition has continued intensely to this day without any significant stoppages other than during WW I & II.

Although the general design style of most Limoges china remained fairly constant throughout the last two centuries, we often see some influence of the artistic norms that prevailed at certain periods, such as the Art Nouveau or Aesthetic Movement (ca 1880s - 1920s) and Art Deco immediately afterwards.

When appraising Limoges China, it is important to consider the marks stamped on their underside. These reveal not only the maker but also the period that they were made. To accurately identify Limoges marks and properly authenticate Limoges China marks, please see our Porcelain & Pottery Marks Guides. Note that many Limoges marks are not necessarily those of their makers, but rather of trading companies that engaged in exporting those to other parts of Europe and particularly to America. In fact, many marks on Limoges china refer to US-based Importers in New York, Chicago & elsewhere, but can help in estimating their age.

Appraisal values of Limoges china depend heavily on condition, completeness of the Set, and very importantly the specific elegance of its decorative designs. Prices at auction do not vary much between similarly sized or decorated Limoges china sets, but tend to be higher for older pieces or richly decorated wares. See below for some examples from our Antiques Price Guides or view items in specific categories such as LIMOGES PORCELAIN BOXES or LIMOGES PLATES and LIMOGES VASES.

To read more on Limoges in general, please see one of our articles on Limoges Porcelain Marks.

Three-Piece Group of Continental Porcelain, consisting of a large...

ASSEMBLED SET OF HAVILAND LIMOGES CHINA. All with blue and pink...

Partial service for twelve (12) of Limoges china imported by...

A Set of Raynaud Limoges China "Dioranoir" by Ceralene Produced by...