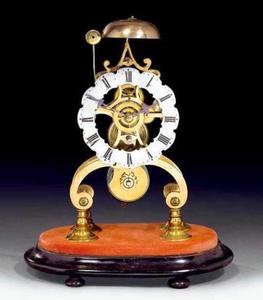 There are several types of ANTIQUE CLOCKS, each with its characteristic details that place it in one category or another. Determining the type of Clock and its approximate age or maker are key factors in determining its value and worth in today's antiques market. Here are some basic types of antique clocks with specific notes on each from our Antiques Pricing Guides:

The above list is a brief account of most types of Antique Clocks that have emerged in the last two to three centuries and is meant to introduce collectors to their most significant characteristics and features in order to help in further researching your own treasures. As known, there are several Horological Museums or Exhibits in most major cities in America and around the world, and hopefully the above brief summary on each type of antique clock can enhance this experience. For those deeply involved in Time-Keeping collectibles, a related interesting area of scientific collectibles is that for ANTIQUE SUN-DIALS, which is another fascinating and historical facet of a type of "clock" that existed since antiquity, but was still made in large numbers well into the 17thC. Most very antique Sundials are very ornate and are appraised consistently high, especially if there is an interesting provenance story associated with them. The vast majority of antique Sundials were made of Bronze or Brass and even Stone or Marble and are relatively simple in appearance. However, some exceptional examples were adorned with precious stones or metals and had nicely designed elements that nowadays fetch high prices at auction.

CARRIAGE CLOCK. French carriage clock in an unusual round shape....