Porcelain marks are usually identified by naming the original manufacturer or maker and dating them to a certain period. In this fashion, if a pair of Urns are marked with a Sevres mark that dates ca 1800 – 1820s, we call them “A Pair of Sevres Porcelain Urns, ca 1800–1820s” and that’s it! This sounds simple enough and applies to most porcelain antiques & collectibles found in the market today. However, there are groups of porcelain marks that are identified based on the location of the maker rather than the actual company, which can be confusing.

This is particularly true for certain regions in the world that have a rich tradition in porcelain making, usually because there are several factories or studios in the area. One of the most famous such regions is Dresden and Meissen. Contrary to what many believe, “Meissen” and “Dresden” are not actual porcelain manufacturers. These names represent specific towns in the Saxony region of Germany (previously Poland) and this misnomer is partly explained by the very history of the first indigenous appearance of porcelain in Europe, and especially by how its production spread from that region thereafter.

White porcelain as we know it today, was first invented by the Chinese, some say as early as 100 BC. Since then and for a very long time, Europeans tried to recreate this superb white substance that is malleable enough to allow forming elaborate objects but becomes hard, and still very white, after firing in a Kiln. Clay and terracotta were well known since the ancient Greek times, thousands of years before porcelain entered the scene, but the sparkling whiteness of porcelain was much more desired - and elusive. As a consequence, porcelain was imported in large numbers from China and Japan, who had also mastered the art of porcelain early on, and became the prized possessions of many an Aristocrat or Royal Palaces in Europe. Chinese and Japanese porcelain was extremely expensive and usually came in Blue & White or in other traditional Oriental themes. Hence, the now common name of “china” (or chinaware) as used for porcelain, primarily in English speaking countries. And although there were numerous attempts in making similar compounds such as Stoneware or Earthenware in Italy, England, Holland etc, which were then painted or “glazed” white, true porcelain as we know it today was just not in the cards as of yet.

Luckily – literally – a pair of well known Alchemists, Tschirnhaus and Bottger, while experimenting with all sorts of concoctions in their laboratories, received a mixture of local clay from Dresden that seemed to have some similar qualities as porcelain from China. After analyzing this local “mud”, they finally came up with a mixture of Kaolin and Clay that, after several refinements in terms of the required proportions, yielded the desired properties to be the first “real” porcelain ever made in a Western country. This took place between 1700 and 1708. Within a couple of years, in 1710, Augustus II the Strong, the then ruler of Saxony where the towns of Meissen and Dresden are located, financed and established a factory, with Bottger as its first Director (Tschirnhaus died in 1708). This was the very first porcelain manufacturer in Europe and was appropriately named “Royal Porcelain Manufactory in Meissen” only a few miles away from Dresden. And although the name changed somewhat when Germany no longer had a Royal family, to “State’s Porcelain Manufactory in Meissen”, most collectors refer to products by this factory, which is still in full operation, as simply “Meissen” or “Dresden”.

The first porcelain marks used by the Meissen factory were not officially registered or “protected”. This triggered a huge market of wares made by others, some of equivalent quality as the authentic Meissen, but having their marks appear as imitations or at least very similar to the original marks used by Meissen. The initials KPM, KPF and MPM were extensively copied, as well as the intertwined initials AR, for Augustus Rex, almost in an identical manner. And of course, the most famous Meissen mark ever copied was the Crossed Swords and its many variations. Not only other newer porcelain factories began to use these marks in Germany, but this practice expanded to a number of decorating and art studios that did not necessarily have their own manufacturing facility to produce porcelain. Furthermore, this furious copying of both the style and marks as used by the original Meissen factory was soon to become a thriving business in the rest of Europe like in France, England and elsewhere. To this day, the crossed swords of Meissen are the most copied porcelain marks ever.

MEISSEN PORCELAIN MODEL OF A PUG DOG AND PUPPY

Although the original Meissen factory eventually prosecuted the use of these marks by others, most imitators just changed their marks slightly and continued to use them as before. Most of these changes were very minor, like a line or two across the crossed swords, or by placing numerous dots or numbers next to them, or curving the swords a bit, or even using just a couple of crossed lines (swords without handles). This practice, which continues to this day, especially on thousands of recent imports from Asia, has been a source of frustration and monetary losses for many collectors or dealers. Therefore, it is particularly important that Meissen marks are examined very carefully and compared against authentic ones with great attention. Our marks4antiques.com research website, in the Ceramics section, provides a huge database of porcelain marks as used by both the original Meissen factory and the various Dresden area studios. It also includes known copies of these marks, down to those used nowadays on recent Asian imports.

However, the most important side-effect and a challenge of all this Meissen mania, at least for most collectors, has been the proper valuation or appraisal of the numerous antique copies, which are often as magnificent as the authentic ones. For example, Helena Wolfsohn was one of the most commercially successful and prolific imitators of original Meissen pieces. Since 1843 and well into the 1940s, her factory produced items that were almost indistinguishable in quality and used forged Meissen marks that looked practically identical, like the intertwined AR initials, especially in the beginning. Her company was later taken to court by Meissen, and their marks begun to be more distinct and different, such as the famous “crowned D” mark, on pieces still revered as great works of Decorative Arts. Franziska Hirsch was another prolific decorator of Dresden & Meissen ware, ca 1890s - 1930, and used a "feathered H" mark, again a symbol of high quality and standards, although not authentic Meissen. A bit later, Edme Samson, another copycat who was as successful in his native Paris, France, created “true” reproductions of Meissen pieces down to the finest details. These were made and sold mostly on commission to rich patrons that preferred to display a copy and safely hide the original as a precaution against theft or damage. This provided the financial backing that Samson needed to begin producing thousands upon thousands of Meissen copies and of other famous porcelain factories. He was soon known as “Samson the Imitator”. However, to his credit, pieces made at the Samson factory, which was closed for a while in the 1920s and re-opened by one his grandsons ca 1940s, almost always included the letter S next to the crossed swords or used other ways to indicate that theirs was a copy. Samson's company did the same on all other marks that he copied, such as Capo di Monte (Ginori), Sevres etc.

Perhaps even more abundant, were porcelain items, primarily figurines, made by the hundreds of Decorating Studios in Saxony. At one time, there were an estimated 300 or more such studios and most became established in the vicinity of the towns of Dresden and Meissen. Several others spread across to Bavaria, Prussia, and even other countries like Austria, France and England. Some still survive today and produce fine specimens, mainly souvenirs for the Tourist trade. The vast majority of these studios and workshops did not have their own porcelain manufacturing and many of their wares were purchased as blanks from actual factories, which were then decorated by their artists. However, their contribution to decorating was not limited to hand-painting their items and simply firing them in the kiln to set the glaze. It often involved adding handcrafted details such as a purse or parasol on a lady figurine, an extra nearby grazing goat or flowers, a different hat or attire etc. These extra details were modeled and made of real porcelain and were created by experienced artisans, equal in skill to those that worked at the original Meissen factory. In fact, many of these same artisans and craftsmen at Meissen had two jobs, one at the factory and another at one of these studios. This explains the remarkable similarity and level of quality of these “copies”.

One of the most interesting and ingenious extra details was what is now referred to as “Dresden Lace”. This was a decorative element characteristic to the area of Dresden & Meissen and developed by local artists. It was made using real lace (cloth) that was dipped in liquid porcelain and then applied to the figurines by hand. The result was a delicately fine mesh that in appearance was almost indistinguishable from the soft lace itself. Unfortunately, as pretty as it looks, it is very brittle and as a consequence, we often see older figurines having tiny breaks or chips in those areas.

In conclusion, the correct use of the words “Dresden” and “Meissen” refer to the location of the first porcelain factory in a Western country, not necessarily the factory itself. Although nowadays and in some cases, when one refers to Meissen they mean the original factory, this term and especially Dresden, are more accurately applicable to all of the porcelain facilities and decorating art studios in the region, in a collective manner. Lastly, both of these terms, Meissen or Dresden, also refer to the decorative style that flourished at that location and has continued to evolve and be admired ever since. 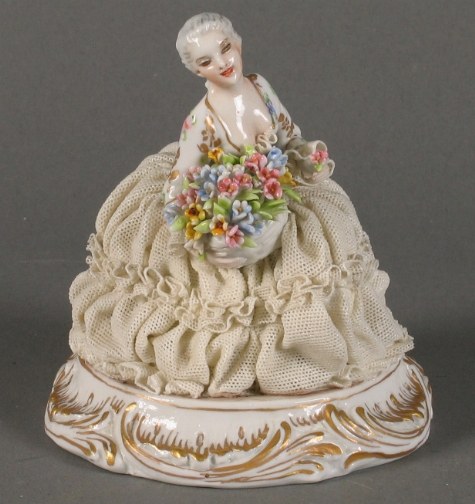 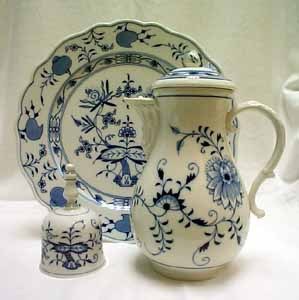 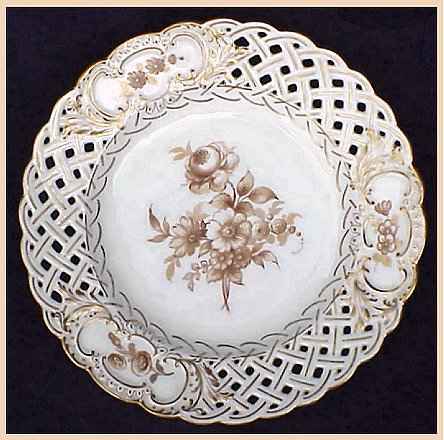 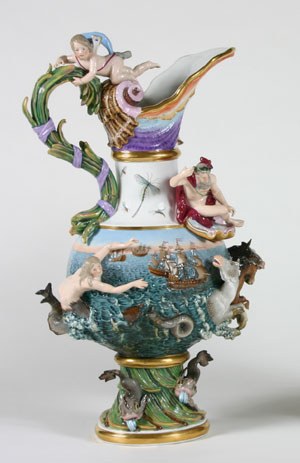