Quimper Faience refers to a fine grain earthenware decorated with an opaque, tin-based glaze. Each piece is completely hand painted without the use of decal or stencil by one of 48 painters (all but 4 are women). The majority of the patterns are painted on top of the raw glaze, which is a formidable process. Signed by the artist and completely painted by one person from start to finish, it reflects the individual touches which make each piece unique.

Painting Quimper is a true folk art, which has been passed down for generations. Each pattern requires a combination of different strokes and brushes. Artists spend 2 to 3 years learning the quick flicks of the wrist, a painting technique known as "coup de pinceau", creating the distinct naive designs that have come to be cherished by collectors around the world. An experienced painter decorates a plate in 25 minutes to one hour depending on the intricacy of the pattern.

Decor Henriot is the most traditional pattern showing the Breton figures. A Breton (or Bretonne if a woman) is a resident of Brittany. Brittany is a region in northwest France where the town of Quimper is located. This type of design has been applied continuously for 100 years and has been exported to America since the late 1800's. Over the years, thousands of molds and over 100 patterns have been created by the artisans at the factory. Patterns featuring peasant figures in bright traditional costumes, birds, and roosters (the symbol of France), and botanical scenes were designed for the various pieces. Slowly, these are being revived, and today the atelier produces 30 patterns as well as special orders for decors presently not in production.

Antique Quimper is sought after by collectors throughout Europe and America. Desirable pieces have recently sold at auction for as much as $10,000.

Present day Quimper is dishwasher safe and has been lead-free since the end of World War II. It is not microwave safe.

The handpainted French faience known as Quimper (pronounced kam-pair) dates back to 1690. It is earthenware fired with a tin-based glaze. The pottery takes it name from the town of Quimper, located in northwestern France, where potter Jean-Baptiste Bousquet built his kilns. Although the area of Locmaria in Quimper had long been associated with pottery as far back as Gallo-Roman times, Bousquet is credited with being the founder since he was the first to hire other artisans and form a factory.

In 1776 a rival factory was founded and a third pottery opened in 1778. The three firms produced faience independently and were able to survive difficult times in the 1800's by producing pipes and other utilitarian items. The artists originally painted with their fingers, and only a few forms and simple floral patterns were used.

During the late 1800's, Breton country life inspired the pottery's decorations under the direction of Alfred Beau and the Porquier factory. Items featuring the sturdy peasants in their traditional garb, men in bragoubraz (baggy pantaloons) and women in long dresses, aprons, and towering headdresses known as coiffes, and elaborate botanical scenes were introduced; artistic earthenware objects were also created.

The two major factories, Eloury and Dumaine, merged in the early 1900's to form the Henriot factory, and the Bousquet factory was sold to Jules Verlingue and retained the name Grande Maison HB. In 1968, the son of Verlingue purchased the Henriot factory and merged them under the name Les Faienceries de Quimper, and under one roof at the HB factory, although each preserved its own forms, designs, clients, and signature marks.

In 1983, bad management and French laws intervened to force bankruptcy. The factory employed 250 people, but there was not enough work for all of them. Under French law, one cannot lay off workers without filing for bankruptcy. The owner Verlingue filed for bankruptcy and then tried to hire back 150 employees to reopen. The workers, who were unionized, vehemently opposed this move and succeeded in closing down the factory forcing him to declare bankruptcy again. The bankruptcy court then took over and put the factory up for sale. It was finally purchased in 1984 by Paul and Sarah Janssens of Stonington, Connecticut, who were the U.S. importers at the time. The factory reopened officially on March 14, 1984 and is enjoying an incredible rebirth with sales outnumbering demand. It employs today over 150 people both in France and the U.S.

In general, older pieces are often not marked; but if you come across a brightly decorated piece that isn't marked, it's most likely of post-WW II production. Early original pieces are very rare and those can be seen in museums or fine private collections. The vast majority of "antique" Quimper at antiques fairs nowadays are recent reproductions.

Where the piece is marked is not an indication of age. In general, the more involved the mark, the newer the piece. The marks are hand-painted; each one will be different.

If the mark includes the word "Quimper", assume it's a 20th Century piece unless it depicts a Quimper scene (determined by the costume, coiffe, background, etc.) Early pieces may have just the title of the scene without a factory mark. 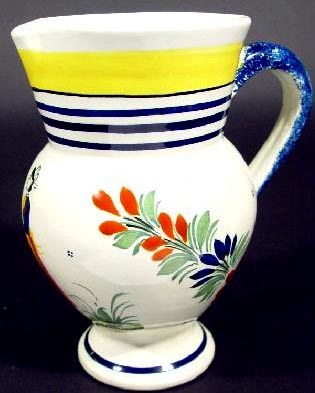 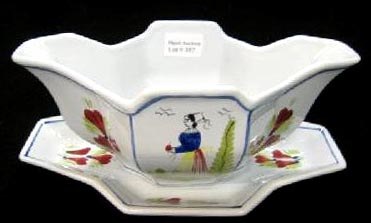 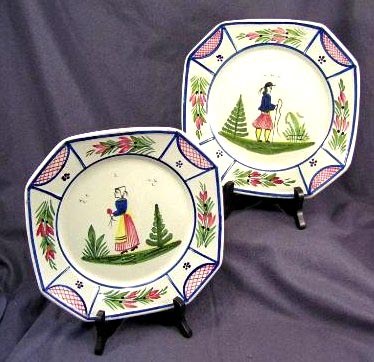