Russia has a long tradition of silversmithing and jewelry making since at least the mid 17thC. However, it was not until the 1840s when Peter the Great enacted several reforms that encouraged the Arts & Aesthetics, which then gave sudden rise to a multitude of new Artisans in Silver & Jewelry and whose creations were mostly in the prevalent European styles of the day. Around the end of the 19thC, Russian silversmiths & jewelers adopted their own twist in imagery and inspiration to create uniquely designed pieces with a distinctly local flair that almost instantly became very popular and remain highly desirable with collectors to this date.

The most characteristic elements of this particularly Russian style in jewelry & silver include their much more detailed and ornate designs, further enhanced by extensive engraving, niello techniques, repousse, gilding, and enameling. These elements added a colorful dimension to their jewelry and silver items, and although the themes of inspiration remained to be of European nature (classical & renaissance), they could be instantly recognized as Russian. Insatiable public interest by both local affluent buyers and European dignitaries was further amplified by the numerous Arts & Industrial exhibitions that were constantly organized by the authorities and manufacturers’ guilds. This led to fierce competition amongst the various silversmiths & jewelers of the period and helped in raising the levels of creativity and highly skilled workmanship to unprecedented levels.

Russian Silver and Enamel Sugar Basket, with marks for Moscow, 1882

Russian silver marks & hallmarks were officially registered and diligently enforced. In addition to their function as a Tax revenue system on precious metals, these marks on silver or gold and jewelry have now become the primary clues to identify their maker, age, and exact place of origin. The most significant locations where Russian silver & jewelry making flourished are Moscow and St. Petersburg. Other cities include Minsk (now Belarus), Kiev & Odessa (now Ukraine), Tiflis (now Georgia), Riga (now Latvia) and many others. Each city had issued specific Assay & Standards Hallmarks for all precious metals and actively encouraged all artisans, jewelers or silversmiths to also include their own trademark or name and/or initials. Some makers used their entire name, most notably Faberge (or Фаберже in Cyrillic, who also signed in Latin characters), Ovchinnikov (or Овуинниковъ, who also founded one of the most important Arts Schools of the time to specifically train craftsmen & artisans in the trade), Sazikov (Сазиковъ), Sokolov (Соколовъ), Grachev (Грачевы), Postnikov (Постниковъ), and many others. In general, the vast majority of Russian silversmiths & jewelers signed their pieces using initials in Cyrillic.

Our marks4silver section of our marks4antiques.com research website includes makers’ marks as well as all important Assay & Standards Hallmarks from Russia and related locations that later may have become independent countries. These span the period from the mid-17thC to Present.

It is important to note that local Russian folklore and history also played a very important role in influencing Russian silversmiths & jewelers. For instance, because wood was always regarded as the primary national medium or material in the Arts thus far, many items in silver included details that resembled structural wood, such as little “branches” instead of handles or tiny logs made of silver adorning the sides of a piece. In turn, this helped make the progression of the so-called Russian style to the prevalent Retrospectivism (Bidermeyer), and later Art Nouveau designs of other European countries, seem much more of a natural transition. Additionally, enamelware, especially in the form of the now famous and priceless Russian Orthodox icons and numerous ornate jewelry or silver decorative items, have since become a highly recognizable tell-tale sign of Russian craftsmanship

It is no coincidence that notable Royals and Noblemen were vying for Russian silverware & jewelry with remarkable appetite. In response, many entrepreneurial Russian silversmiths & jewelers begun opening outlets and design centers in other major capitals of Europe, such as in London and Paris. This, in turn, caused many prices to quickly be inflated and surpass these items' real value in terms of their intrinsic content in precious metals or stones. The trend was eventually reversed after the revolution of 1917 as many notable silversmiths & jewelers from Russia had already expatriated at the first signs of trouble to continue their commercial success elsewhere, which however quickly faded because that style was by then out of fashion, only to revive again in the most spectacular manner by today's buyers, especially rich and successful globe-roaming Russians who are now enthusiastically eager to reclaim their pre-Communism glory and its symbols. As a consequence, nowadays antique Russian silverware & jewelry dating from the mid-19thC to around 1917 are again extremely desirable and fetch very high prices at auction around the world. 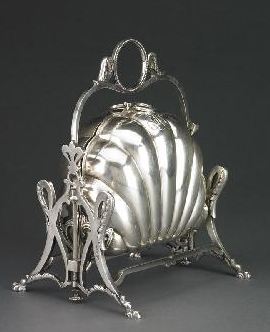