FRENCH INFLUENCES ON AMERICAN SILVER
DURING THE 16th - 18th CENTURIES

The appreciation and therefore the collecting, of French-styled domestic (US) silver is comparatively recent. It was not until the middle of the nineteenth century that several far-sighted amateurs, realizing the beauty of old French plate and its rapidly increasing rarity, began to acquire it themselves and took steps to educate others against its destruction.

Probably the domestic silver of no European nation has been so ruthlessly destroyed in the past as that of France. The French converted large quantities of silver into household plate, thereby provoking in the seventeenth and eighteenth centuries confiscatory edicts aimed at the reversion of the metal to monetary purposes. In the nineteenth century, fashion took a hand in the matter and deliberately abetted the destruction of old plate to provide metal for the creation of its current vagaries.

French silver marks indicate quite precisely when, where, and by whom a piece was made. As early as the fourteenth century a master silversmith was obliged to strike each object made in his workshop with his personal mark as a guarantee against fraud. The forms most frequently used included the maker's initials and a carefully chosen device to obviate confusion with the mark of a maker with the same initials. Fortunately, most pieces of French silver retain their maker's marks. Several other types of marks also appear on French silver: the warden's marks, indicating that the piece conformed to the standards of the guild, and marks of charge and discharge indicating that the required taxes had been paid.

Such few examples of French domestic silver of the early sixteenth century as exist are more in the late medieval tradition than in that of the Renaissance. By the middle of the sixteenth century, however, the French had been converted to Italian taste, and the comparative simplicity of the earlier pieces was succeeded by intricate ornamentation. Most of the French silver of this period has disappeared.

French domestic silver of the seventeenth century has survived in greater quantities than that of the sixteenth, but even so it is exceedingly rare. The decoration varied greatly in degree of elaboration. A large part of the silver which has come down to us is characterized by frugal ornament effectively designed and placed so as to enhance the generous plain surfaces. During the second half of the seventeenth century many types of utensils were produced, the most conspicuous of which is the ‘ecuelle’, or two-handled dish with cover and plate, used to serve individual portions of soup and other foods. It finds its counterpart in American silver in the porringer, but the latter ordinarily has only one handle. Cut-card work was one of the favorite decorative conceits in this period, its name being derived from the fact that its thin, flat appearance suggests cardboard from which a design has been cut. Toward the end of the century, there was an increased predilection for small-scale ornament inspired by the architectural detail of the period.

With the dawn of the eighteenth century, certain new tendencies may be noted, especially the inclination to enrich plain surfaces with delicate engraved and applied ornament. Much of this new ornament was indirectly inspired by the published designs of such men as Daniel Marot and Jean Berain. In these designs may be found many instances of the use of lambrequin motives and intricate arabesques. Although on the whole, the objects made at this time have lost something of the virility and large manner of the seventeenth century, yet, to a degree, they compensate for this with increased elegance and variety of form.

The rococo style first became conspicuous in French silver in the 1730's and continued to be popular for the next forty years. The essentials of the rococo style-asymmetry, the flowing line, the shell motive - were admirably suited to the silversmith's needs. In fact, there is no period in the entire history of French silver in which such a fine harmony existed between form and decoration as in the middle of the eighteenth century. The period was graced by numerous distinguished craftsmen, the two most celebrated being Thomas and Francois Cermain, father and son.

It should not be assumed that fine workmanship and excellence of design were confined to the work of the Parisian silversmiths, for many a provincial center could boast craftsmen quite on a par with those of Paris. Recognition of this, however, is quite recent, and for many years provincial silver was held in far less esteem than Parisian. The silversmiths of the provinces did not merely copy those of Paris but had ideas of their own, as regards both form and ornament, which they did not hesitate to express. The silversmiths of Toulouse, for instance, were especially adept at the interpretation of rococo ornament.

The interest in Greek classical art and archaeology which swept over Europe in the 1750's and 1760's did not appreciably affect silver design until nearly 1770, but from that date, the rococo style was rapidly superseded by the pseudo-classical style, which continued in one form or another until after 1820. Classical ornament was less in harmony with the essentially utilitarian forms that prevail in domestic silver, and as a result, the silver on which it occurs frequently lacks the unity of the preceding style. Among the earlier exponents of the pseudo-classical style was Delafosse, whose published designs were widely circulated.

As the use of classical forms progressed, there was a loss in the spontaneity of expression and a tendency to interpret less, to conform more closely to archaeological prototypes. The ultimate result of this movement was the so-called Empire style, which often gives the impression of being lifeless and unsympathetic. This style crystallized far earlier than is generally realized and lasted far longer. It developed before the Bourbons went to the guillotine in 1793 and was still flourishing in the period of their restoration (1814-1830). The period that immediately follows, gave emphasis on Romanticism and its predilection for "improved" versions of past styles and continued well into the 19thC. 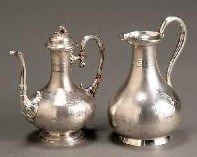 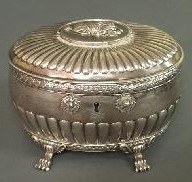 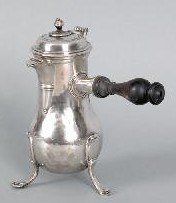