The knowledge of tin-enamel glazes was brought to Europe by the Moors in the twelfth century. Its immediate adoption upon its introduction to Spain and Italy, and thence to France, the Netherlands and England, is understandable when one considers that it made possible the use of painted decoration of an intricacy and variety of color which could not be achieved by the earlier slip, lead-glaze, and relief methods.

According to the most recent studies, tin-enameled wares were first made in England by two Antwerp potters, Jaspar Andries and Jacob Janson, about the year 1567. The exact site of their pottery in London is unknown, and it was not until about 1665, almost a century later, that the industry was carried to the Lambeth section of the city. Thus it is more accurate to attribute the earlier wares to London rather than, as formerly, to Lambeth. Among this group is a rare pair of fluted rosewater dishes, dated 1649, and a little "White wine" bottle bearing the same date. The form of the dishes follows that of contemporary silver. They are very simply decorated in blue with the coat-of-arms of the Grocers' Company and the initials of the owner, W over EC, which have been attributed to Edward Woodyard, a Norwich grocer, on the basis of their similarity to a wine bottle supposedly made for him and now in the Norwich Museum. The graceful little wine bottles are familiar to all pottery lovers and are admired for their simplicity and beauty of form and restraint of decoration. They are considered among the earliest purely and typically English ceramic forms, although their original use is a matter of constant controversy.

Among the foremost patrons of the early London and Lambeth delftware potters were the apothecaries who required great numbers of special vessels to contain the various powders, pills, ointments, confections, and syrups in use up until relatively modern times. Some spouted drug jars contained Syrup of Chicory with Rhubarb. Other similar jars in the Baker collection once held Syrup of Ginger, Syrup of Quinces, and a special concoction called simply "EXPECTORAL" (expectorant syrup). These everyday products of the potter are superb examples of the throwing technique - foot, body, and spout all being made on the potter's wheel. The decoration is similar to contemporary Dutch examples and only the fact that so many of these jars were found in excavations of London streets and are clearly from a period when importation was illegal authenticates their English origin.

In 1683 the Temple Pottery, an offshoot of Brislington, was founded in nearby Bristol, the city which became one of the leading delftware centers of the eighteenth century. Plates with the delightfully naïve portraits of King William III and Queen Mary may have been made at Bristol, and on some specimens, the extensive crazing of the glaze may indicate a newly opened pottery.

The Dutch influence on English pottery reached its height at the end of the seventeenth century. Large bulbous mugs are decorated with contemporary scenes of a gentleman addressing a seated lady, flanked by oriental birds perched on flowering branches above. In most cases, the border is made up of a band of Chinese ]u-i heads. It is interesting to note that the drawing is done with a blue-black outline, known in Dutch as ‘trek’ and used in England for only a decade or two.

The French influence of the mid-eighteenth century was also felt, especially in the charming landscapes attributed to John Bowen, a Bristol decorator. For example, a large, impressive, footed vase with lion and mask handles shows his characteristic tall slender trees in the foreground, and figures in contemporary dress drawn with a quick, sure brush. Probably by another skilled painter is a small, this time done in soft tones of manganese purple instead of blue.

It should be stressed, however, that the English Potteries tried very hard to avoid copying, although not always successfully. Although the Chinese style was in fashion in England, as elsewhere, throughout the eighteenth century, they did not often reproduce Chinese pieces but adapted the motifs and subject matter to contemporary life and the tastes of their patrons. Blue and white coloring was used all through the century, while strong baroque colors prevailed during the first part and were followed later by the softer tones of the rococo.

Many of the innovations and developments of the Bristol delftware of the mid-eighteenth century were formerly attributed to Joseph Flower, who, though trained as a potter, was for most of his life a "China-man," or dealer in china and glass. One of these English developments is the so-called ‘bianco sopra bianco’, an attractive white floral scroll border on a pale blue or blue-gray ground, which was based on an Italian majolica technique. This style was used in all leading delftware centers, Lambeth and Liverpool as well as Bristol, and is also known on French and Swedish wares. From fragments found on factory sites, specific designs can be attributed to the different localities.

Some pieces may also be attributed to Bristol with some assurance. These are usually decorated in soft blue in the Chinese style, but is quite unusual to find complete and intact pieces these days. The use of slip casting was introduced to England about the middle of the century, used mostly for tea caddies and flower pockets. Most are painted with Chinese flowering trees and pagodas in a delicate blue outline and the curved chamfers of the corners are treated with reserved scrolls in the Chinese manner. Cornucopia flower holders were made at Liverpool, which first produced delftware early in the eighteenth century but rapidly developed into one of the leading manufacturers and exporters. In fact, the soft polychrome is typical of the Liverpool painters and can also be seen in punch bowls with the delicate village landscapes and reminds one of the contemporary English watercolors.

Though it has been recently gaining in popularity, English delftware is still too little known to American collectors. It deserves to be appreciated for its own merit in craftsmanship, color, form, and decoration rather than compared with the sophisticated Holland "Delft" or Meissen porcelains which were made for a completely different market. 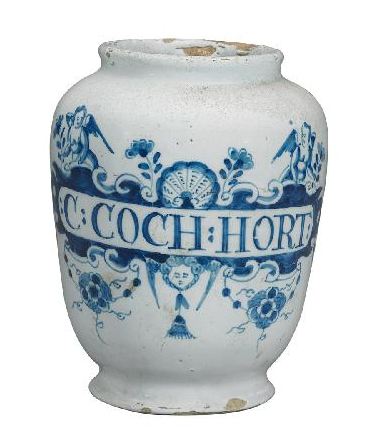 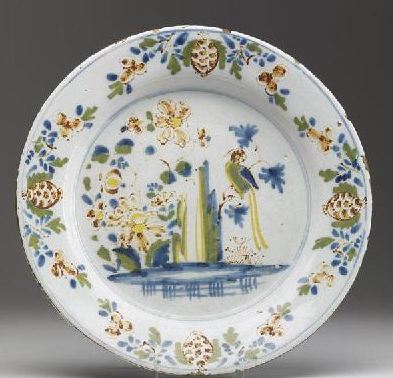