China patterns are designs that decorate sets of Dinnerware, Tea Sets, Chocolate Sets and other Tableware or Chinaware. Most porcelain china comes in a series and some are individual patterns that are issued by a manufacturer. A large number of china patterns are repeated or re-issued over time by a company, either in identical format or by varying some elements such as the color or border shape. However, although some designs are registered and are protected, at least in principle, their patent only lasts a few years. For this reason, many are often duplicated or copied by several other makers.

To this point, around mid-to-late 19thC, most china patterns were officially registered and were issued a Patent or Design Number. This was especially true for designs created in England, but it is rarely the case nowadays. Originally, most patterns were simple and used only one or two colors, such as in the cases of those imitating Chinese or Oriental scenes or themes, collectively referred to as Chinoiserie. Most famous of these are of course the Blue Willow pattern and other Blue & White patterns such as Flow Blue. Not all china was made of Porcelain or Bone China. Most of the early designs and patterns were made on Stoneware or Earthenware and later Ironstone, a mixture of earthenware and iron fillings for a stronger composition, especially in Europe and America.

China patterns must not be confused with Style. Although some clearly imitated a certain “look”, such as Imari from Japan or Delft from Holland (which was in itself an imitation of older Blue & White china patterns from the Far East), most chinaware patterns have a distinct design that adds to their decorative appeal. Therefore, it is often the case that a certain number of dinnerware designs are of a particular style but depict different decorative themes. For example, the Imari style is available in many different versions, for example, when examined carefully, there are some distinct variations between those made by Royal Crown Derby, Coalport, Noritake, Mason’s Ironstone and others. And although most of these companies called their version as Imari, the term “Imari”, when correctly attributed, refers to a style found on many other porcelain items, including vases, figurines etc. In fact, “Imari” derives its name from a particular location in Japan where white porcelain decorated with rich blue and gold colors was developed and perfected many centuries ago.

There were many techniques used to apply a pattern on Tableware and other Dinnerware Sets. The vast majority were imprinted using Transferware, a method that involves creating a decal and then applying it on individual dishes or other items. An artist carefully designed a transferware master sheet or decal that was then recreated in large numbers of very thin film-like sheets that were applied on each dish, plate, cup & saucer or teapot. In some instances, and especially for more expensive chinaware, artists would further apply hand-painted accents or decorative elements to enhance the overall design. These extra decorative details helped in making some china patterns more pronounced and appealing. Today’s transferware methods at a manufacturing setting allow for multiple layers in different colors, much like industrial Printing, that helps create more vibrant patterns without the need for manual decorative enhancements.

Most porcelain chinaware feature decorative arrangements that represent floral or animal themes like birds or animals, historical places or persons, popular tourist destinations (souvenirs), stories & fables (e.g. Blue Willow), or abstract and geometric drawings in colorful combinations. Most patterns are named by the theme they represent, which, along with the manufacturer, identifies them and usually dates them. The vast majority of designs, especially those made in England during the 19h and early part of 20th centuries, typically include the pattern name next to or near the actual maker's mark. The spelling of certain patterns has changed over the years or was deliberately varied by certain manufacturers to distinguish them from the competition. Therefore, the pattern “Pekin” is also available as “Peking” or “Pek-ing” or “Pek-in” etc, all used by different manufacturers but representing very similar designs related to the Chinese city of Peking (now called Beijing).

It is important to note that there is a difference between dinnerware patterns and decorative designs applied on plates that were meant for display, either in a cabinet or hung on a wall. Most famous of these are display plates made in Vienna, Austria, and Limoges, France, as well as numerous examples made for the Tourist industry depicting places, bridges, castles, harbors, rivers, mountains etc. These decorative plates, especially those from Vienna, were decorated almost exclusively by hand and usually by experienced artists, some of whom also worked in other media such oil-on-canvas or watercolor paintings. Although some of these display plates were produced as a series, for example the Four Seasons or Royal Families or Olympian Gods & Goddesses etc, these are not regarded as patterns in the same sense as to when applied on chinaware. After 1930s, industrial methods to reproduce designs in full color were vastly improved, so most such decorative plates made ca mid-20thC or later, were not necessarily painted by hand, regardless of whether there is a signature on the plate or not.

More detailed information on researching the maker or age for porcelain, chinaware, and pottery is available to members of our marks4ceramics section of our marks4antiques.com website 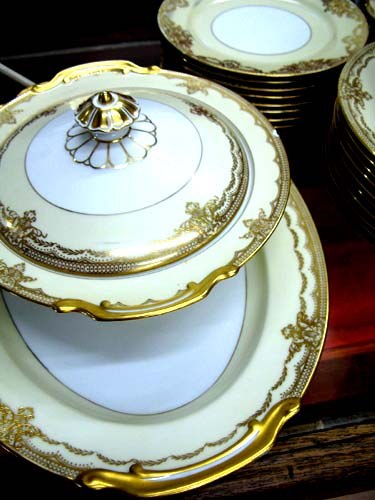 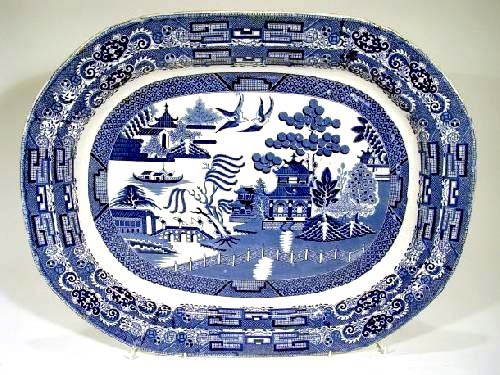 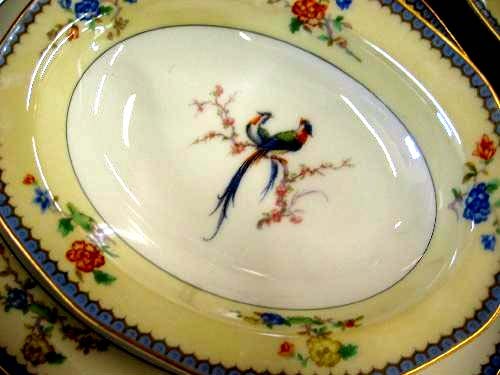