The art of enameling in Europe has a history going back to the Middle Ages, and many processes are known. The type of enamel produced in England in the eighteenth century has become known as painted enamel, a term not entirely appropriate since many English enamels are transfer-printed. The method consisted of first coating the base, a copper plate, on both sides with a vitreous enamel powder. An initial firing fixed the ground, and the decoration was added subsequently in the form either of painted enamel colors or of transfer prints.

There is evidence that enamels were made in England during the earlier part of the eighteenth century. A ‘General Description of all Trades’, published in 1747, states that "Enamelling is a curious art, and not much labour but that of laying and painting colours, plain or in figures, on metal. The masters in this way are not many . . ." Contemporary trade journals refer to "toy-makers" in the Midlands but there is no means of identifying individual workshops or any examples which could be attributed to this early date. Judging by the 1747 reference quoted, the art of enameling had as yet acquired a poor reputation. It was not until the founding of the Battersea factory in 1753 that enameling on copper achieved any aesthetic significance in England.

Until some forty years ago, collectors of English enamels were content to divide them into two classes, Battersea and Bilston. All fine enamels, including those with colored grounds, were indiscriminately attributed to Battersea, while all the inferior patch boxes, bearing such inscriptions as ‘A gift from Brighton’, were left for Bilston. In 1924 the publication of the Schreiber Collection Catalogue in the Victoria and Albert Museum brought about a new evaluation of the enamels made in the South Staffordshire town of Bilston. Although it then became clear that many of the fine enamels, notably those with the rich colored grounds, could no longer be attributed to Battersea, yet the prejudice against the term Bilston or Staffordshire has persisted until this day and the term "Old English" is frequently used to indicate the post-Battersea productions. The subject is complicated by the fact that there must have been many small enameling shops in London as well as in the Midlands which were set up either before the Battersea factory closed down or shortly after and whose work is very difficult to identify. Moreover, many copper plates used at Battersea for transfer printing were evidently bought by the Midlands workshops on the failure of the Battersea factory, and the decorators themselves probably moved on to work in other towns.

English enamels of the eighteenth century can be divided into four main groups: Battersea enamels, which are considered in detail here; the Midlands enamels, made mostly in Bilston but also in Wednesbury and Birmingham; Liverpool enamels, apparently all transfer-printed; and what can be described as Hausmaler enamels, made by independent enamelers working in a small way in their own workshops.

The firm of Jansen, Delamain and Brooks began to manufacture enamels at York House, Battersea, in 1753. Brooks was a Dublin mezzotint engraver who had a part in the invention of transferring printed designs to porcelain and enamel. The rights in this invention were bought by Henry Delamain, also of Dublin. Stephen Theodore Jansen, a well-known businessman and Lord Mayor of London in 1754, was evidently the financier of the factory which set out to exploit the new invention. The life of the undertaking was, however, short. It must have failed at the beginning of 1756, when Jansen was declared bankrupt.

As a result, two auction sales took place in that year, the first in March being a sale of Jansen's personal property, including a quantity of enamels, and the second in June at which the factory stock was dispersed. Notices of these sales in contemporary journals provide us with the first documentary evidence that has survived concerning the Battersea production. They refer to "Snuff-boxes of all sizes of great variety of Patterns, of square and oval pictures of the Royal Family, History and other pleasing subjects, very proper ornaments for Cabinets of the Curious, Bottle-Tickets with Chains for all sorts of Liquors, and of different Subjects, Watch-cases, Toothpick-cases, Coat and Sleeve Buttons, Crosses, and other Curiosities, mostly mounted in Metal, double gilt." The list is not exhaustive, for there exist a number of other objects with characteristic Battersea ornament which are not mentioned.

English enamels bear no factory marks to help in attributing them to individual workshops. We have, however, a certain amount of information about the artists employed at Battersea, and this, with the help of the few documentary pieces surviving, has made it possible to list a number of undoubted Battersea pieces. Simon Francois Ravenet was the most distinguished of the Battersea artists. He was a copper-plate engraver of considerable ability; the plates he engraved for Battersea have a characteristic rococo flexibility of line and a self-conscious grace that give them great charm.

Some of Ravenet's plates are signed, but the majority have been identified on grounds of style. He evidently worked in close cooperation with James Gwinn (or Gwim), an Irish engraver and painter. One of the few documentary pieces of Battersea, a plaque decorated with a print of Britannia encouraging the linen manufacture of Ireland, bears on the back the following note in contemporary handwriting, "Drawn by Gwin, engraved by Ravenet for ye Battersea Manf're under Sr. J. Theodore Jansen. Ye design a Compt. for Linen Manufacturers of Ireland during ye Lieutenancy of ye Duke of Dorset." Boxes are sometimes found bearing this same print with a portrait of the Duke of Dorset inside the lid.

Other transfer-printed designs remind us that in addition to the artist Gwinn two of the partners in the firm were of Irish origin. A print of Paris presenting the apple to Hibernia, doubtless a combined work of Gwinn and Ravenet, appears on boxes and plaques. Portraits of two famous Irish beauties, Elizabeth and Maria Gunning, are familiar on medallions and the inside of box lids. These are not taken, however, from engravings by Ravenet, who seems to have been primarily occupied with subjects from Greek classical mythology and allegorical representations of Britannia.

Religious subjects were also engraved by Ravenet, such as Mary Magdalen, the Holy Family, the Virgin, and the Crucifixion, subjects which it is surprising to find in a country so nervous of Popery as eighteenth-century England. Their adoption must be attributed again to the Irish influence at Battersea, and Gwinn probably provided the designs. A series of six plaques illustrating the Passion of Our Lord were taken from engravings by Sebastien le Clerc. Among the transfer-printed portraits engraved by Ravenet are those of George II and the Duke of Cumberland, both technically of outstanding quality.

Almost as important as Ravenet in the history of Battersea is the English engraver Robert Hancock. The discovery in the British Museum of a Battersea pattern book containing designs by Boitard, a French engraver resident in London, some of which bear Hancock's signature as the engraver, has provided proof of Hancock's association with Battersea. These designs occur repeatedly on Battersea plaques and boxes, and the book has made it possible to identify many as Hancock's work. Among them is the well-known ‘Success to the British Fishery’ plaque, a subject of particular appeal to Jansen, who was Vice-President of the Free British Fishery Society.

Hancock's engravings were frequently drawn from Watteau, Lancret, and Boucher, and are found on boxes and plaques, painted over in delicate colors. The artist who painted them had to fill in the space between the edge of the transfer design and the mount of the box lid or plaque. A characteristic solution was to put in one or two swans swimming on a lake with rushes growing on the banks. The painter of these Hancock subjects was capable of work of a very high quality. He was occupied also with a number of coast scenes with shipping and views of classical ruins, some of which are painted directly on the enamel without transfer prints. Other Battersea painters, in addition to similar views, produced pastoral scenes.

The type of flower painting employed on the sides of boxes at Battersea is easily recognizable. It is careful and laborious and the colors are rather drab. The sprays are never in reserve panels but are painted directly on the white ground. An insect is frequently included, and in some boxes a single fly appears in the inside of the lid or on the bottom of the box. The more important boxes bear very fine naturalistic sprays. Battersea bottle tickets appear always to have transfer-printed subjects of putti, taken probably from Ravenet engravings after designs by Gwinn. Snuffboxes in the shape of birds, animals, and fruit can also be included in the Battersea output.

A word or two in general can be said of the Battersea wares. The snuffboxes very often have concave sides, while the tea caddies and larger boxes have straight sides. The enamel ground is of a warm, off-white tone and the painted sprays of flowers, often outlined in brown, give the appearance of having sunk into the white ground. Only one good colored ground was produced at Battersea - a pale yellow - but it was seldom used. The colors used in the painting are fresh but not very strong, with the exception of a dark greenish brown used for reeds or grass in the foreground of an outdoor scene. Like the flower sprays on the sides of boxes, the designs on the box lids or on plaques are never contained in reserve panels or framed within rococo scrolls but occupy the whole space available. 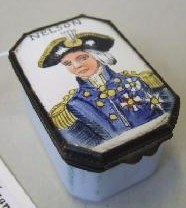 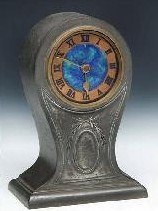 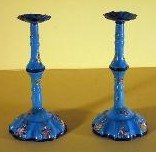