These initials on your lovely Pottery Vases match exactly with a documented mark used by JENNIFER (or JENNY) ANNE CLARKE [b. 1940] while she worked in Bristol, UK, ca 1974 - 1999. Previously (ca late 1960s) she had worked with famous Potters Sally Dawson, David Leach and Ian Godfrey. She is reported to be making "Domestic ware" in Stoneware using a mixture of spray-decorated porcelain and colored inlay decorative details. She also used a lot of Iron slips & Sgraffito. Apparently, she stopped making Pottery in 1999.

This particular shape of the Crown mark on your Urn was used by numerous companies in the UK, notably J. & G. MEAKIN or ADERLEYS and many others. However, it has been extensively imitated by many Trading companies that import items from Asia, particularly from China.

We are puzzled by the fact that there is no country of origin noted on the piece (required after 1891). Usually, items that are imported from China have a sticker or label to satisfy Customs requirements, which is often lost or removed once the items arrive at their destination market. Also, because this mark has been applied so sharply and appears very well defined, I am inclined to believe that this is a recent Asian import.

Unfortunately, this is a fairly recent Asian import made in China. Your item is marked with a crude imitation of the original Capo-di-Monte mark, which has been copied over and over again for over three centuries. You will find many such examples on our "N" Shape Category to compare with yours and confirm. The number below the Crowned N mark is the Model Number and this format is characteristic of Asian imports dating ca 1980s - Present.

Your lovely Cheese Dish is marked with a documented mark used by SAMPSON HANCOCK & SONS [hence the S.H.& S. initials]. "DEVON" in this case is the Pattern name. Since you now know the maker, for faster viewing and to also read a brief Fact Sheet on the company, please use our NAME SEARCH for Sampson Hancock.

This mark was used by a very short-lived company called PLAINEMAISON FRERES ("Freres" means "Brothers" in French). They were in operation only ca 1889 - 1909, at which time they were acquired by T&V [Tresseman & Vogt]. It remained as a Division of T&V and its successors until 1919 when the actual factory was sold and expanded. It was immediately renamed SA Porcelain Grammont producing mostly Industrial Ceramics (Electrical Insulators etc). The mark on your lovely Porcelain Bowl was officially registered in 1895 and as you know the style is very typical of items made by T&V even after they acquired this small factory.

Very few examples are known with this particular mark because the company made mostly White Ware (blanks) that were subsequently decorated by American or French decorating studios, such as T&V. Please use our NAME SEARCH for Plainemaison to see another mark they used that includes the 3 little stars but had added a Fleur de Lys. Also, search for Tresseman & Vogt in our NAME SEARCH to learn more on that company.

Your lovely Figural Group is in the Meissen-Dresden style. However, it is a recent reproduction made in China. Not only is the mark not registered nor documented, but the overall piece lacks some of the detailed features you would normally expect to see on authentic Meissen or Dresden items. For example, the fingers seem to be connected, whereas on most high quality authentic Meissen or Dresden pieces they are distinct and separate. Also, the faces seem to be practically identical with no individuality, which is usually a tell-tale sign of mass producing the heads using identical molds and then attaching them to mass-produced bodies.

The condition of the piece also seems to be remarkably well preserved, for example the tiny flowers usually break after a few decades of enjoying the item, leading to a conclusion that this piece is most likely a recently imported Asian reproduction. There should also be a Country of Origin notation within or near the mark (required after 1891). Instead, most recent Asian imported reproductions have a sticker or label that is often removed or lost after reaching their destination market.

This lovely plate dates ca 1910s - 1930s and is in the distinct style of R.S. PRUSSIA. This Lion mark is typical of a US-based Importer on items from Europe and the original maker's marks do not seem to be present. Many companies imitated this style. Please use our NAME SEARCH for RS Prussia to see their official and documented marks and also read a brief Fact Sheet on the company.

This mark is included under our "A" and also "Z" Shape Categories. It was used by one of hundreds Porcelain Decorating Workshops located in the Limoges region of France and dates ca 1960s - 1980s. The "Founded in 1788" etc in French near the mark is just a marketing script and probably refers to when Porcelain making begun in the region overall, but not for this particular Studio.

Very little is known of this Studio other than they are probably small or was represented by a Distributor who sold their products through Retailer Chains or Dept. Stores and Souvenir shops. Most of their blanks (undecorated porcelain white-ware) are produced and supplied by various factories in France and more recently in China. In this case, to see many other Limoges marks, including this one, on one page and also read Fact Sheets on the companies that are documented, please use our NAME SEARCH for Limoges. 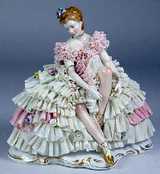 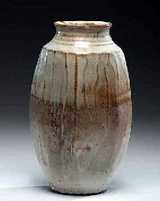