The stamped mark is partly rubbed off, but we can recognize it as that used by FAIANCAS ARTISTICAS from Portugal. The heavy Tin glaze on this item is characteristic of Majolica wares. The mark is under our "ANIMALS" Shape Category, but since you now know the maker, please use our NAME SEARCH for Faiancas Artisticas to see this mark in its entirety. On the same page, you will also find a brief Fact Sheet on the company, which was originally founded in late 19thC. However, this particular mark was used ca 1970s onwards, which dates your piece.

The Kanji characters actually read "Chinese Nation Made" and the overall mark is in the style of seal marks used around the Chinese Qianlong period. However, this item was made ca late 20thC - Present. Nice Dragon-Ware piece, but not antique...

In general, "semi-porcelain" seen on many Staffordshire tableware or dishes refers to white earthenware that have been hard-glazed to improve their durability. For this reason, this material looked almost identical to actual porcelain, but had practically very limited translucency. It was common on most wares destined for heavy use, such as at restaurants, hotels and for everyday use at home. This in contrast to Bone China that was reserved for finer items. See Types of Porcelain to learn more.

This lovely Flow-Blue Pattern platter is marked with the initials for LOCKHART & ARTHUR. The mark also reads "Warranted", which on English wares was used around 1890s - see our Glossary though our EXTRA HELP section. Practically all similar Flow-Blue items from the Victorian period were made using Transferware techniques.

Please note that this particular mark has also been copied extensively by other companies and Porcelain Decorating Studios in Germany, France and elsewhere, so it is up to to you to determine whether it is is indeed an authentic ca 1770s - 1780s piece or a later reproduction based on the history (provenance) of this porcelain figurine. Based on the remarkable detail and condition of your piece as shown in your photos, our opinion is that it is an authentic and genuine Limbach figurine from the original period mentioned above.

You have a genuine and very old Paris Porcelain piece made by MARC EUGENE CLAUSS - PORCELAINE DE PARIS in the distinct Meissen style. You will find this mark under our "CROSSED SWORDS" Shape Category - please note the initials E and C above and below the crossed swords, respectively. Your lovely Figurine was made ca 1870s - 1880s.

You are absolutely correct that A. Mansard opened a Studio at 34 Rue Paradis-Poissonniere around 1830 as mostly a Hard Paste Porcelain Decorating Workshop, primarily on Vienna, Sevres and Meissen copies or in these styles. His sons J. Mansard and later G. Mansard continued this work until the mid to late 19thC [some sources say until early 20thC, but we seriously doubt it]. However, the particular marks on your fine Chinaware refer to a much newer company that opened in early 1970s and used practically the same old name as J. Mansard & Cie and same address on their marks and in many variations. They do not appear to be in business at present and based on other items we have seen over the years with these newer marks, they seem to have closed in the 1980s or early 1990s. This newer company were mostly a Fine Retailers or very possibly a Distributors of elegant chinaware in the older Paris Porcelain style. The mark used by the original Mansard family was oval and had a jagged edge that reads the same address.

This is a lovely souvenir from Italy made in the style of Medieval Pottery from the town of Siena. As I am sure you already know, Siena is located in the general region of Tuscany.

It was made at one of the numerous Pottery Studios that make decorative items mostly for the Tourist Trade and are usually of good quality. The signature of the studio or artisan is as noted on the piece, but difficult to read and any combinations of letters we tried does not seem to indicate any known or registered name. Based on its condition and general appearance, we would estimate that this was made ca 1970s - 1990s.

The mark is in Kanji and reads simply NIPPON, which is the official name for the country of Japan (means Rising Sun in Japanese). After 1921 most Japanese items were marked with the name JAPAN, which indicates that your item was made prior to 1920, most likely ca late 19th - early 20thC, also referred to as Meiji Period.

This is a genuine piece made by S. FIELDING & Co., also known as Crown Devon or Royal Devon. This mark is a variation used ca 1900 - 1910s. Please use our NAME SEARCH for Fielding to learn more on the company and see more of their marks on one page.

In this case, this particular Biscuit Jar was made to order (i.e. subcontracted or outsourced) by Peek Freans & Co., a Biscuits maker probably for their more expensive biscuits line to be sold as high-end giftware. Very nice piece and of good quality.

The Artist on your first piece is LOUISE ABEL (ca 1920s - 1932) and you can also see another variation of the same mark if you use our NAME SEARCH for Rookwood. On the same page, you will also find some other marks used by Rookwood in general and several Artisans that worked for or with the company.

The mark on your lovely Bisque Classic Greek Figure of a Maiden was made in Germany at the VOLKSTEDT factory by RICHARD ECKERT & Co. The mark is actually a bit faded and partially missing, it's supposed to be two crossed elongated "y's" and a sketch of a crown on top. Please use our NAME SEARCH for Richard Eckert to see it listed as No. 6 on the results page. On the same page, you can also read more about this company. The specific mark on your piece was used only ca 1906 - 1908, which dates your piece fairly precisely. 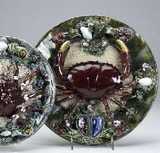