Yes, this is actually the same company and are known to make mostly Men's Accessories, for example Barberiana, Tobacciana, Whiskey Flasks, Beer Steins and other related items, the majority of which were made of Pewter and some of Sterling Silver or Silverplate. The company was founded by Henri Comoy, a Frenchman, ca 1870s, and he was soon joined by other family members and expanded rapidly, mainly making and trading Pipes.

Much later, in 1970, they acquired one of their main rivals, another French company named GBD for Ganeval, Boundier and Donninger, but known as simply GBD with collectors. They soon consolidated all operations at Sheffield (UK) for manufacturing and London for retail sales. They also sold many of their items through other sellers, for example at high-end Dept. Stores etc. They have retained the name Comoy's of London and seem to be still in operation at present.

Items that are marked with "Made in England" were made ca 1890s onwards and most likely ca 1910s+. The mark on your Pewter flask was one of the few variations they used ca 1910s - 1960s, but based on the style, we believe it dates ca 1920s - 1930s at the latest, in other words it is considered quite vintage. The other marks that appear like genuine silver hallmarks are actually pseudo-marks, a common practice ca late 19th to early 20thC on all sorts of NON-Sterling Silver metal ware - see our article on BRITISH PSEUDO-MARKS & HALLMARKS ON ANTIQUE SILVER & SILVERWARE.

Your Sterling Silver spoon was indeed made in London (UK), by THOMAS WALLIS I and dates ca 1766. Specifically, your marks are interpreted as folllows:

This mark is actually included in our database under at least the "ARROWS, AXES, SWORDS etc" and also "WREATHS" Shape Categories. It is listed as WILCOX & WAGONER [later WATSON Co.], New York, NY, USA. This mark was used ca 1900 - 1905.

This lovely item was probably a Baptismal or Christening Cup or simply a gift, probably from the baby's godparents whose name, along with the year, appear on the front, and which seem to have been inscribed much later than its actual manufacture, i.e. probably a family heirloom that was personalized (monogrammed) for the occasion. You can also use our NAME SEARCH for Wilcox to see more of their marks. Please note that this Wilcox company is NOT related to the Wilcox Silver Plate Co. Your item is clearly made of Sterling Silver as noted.

This is indeed an ONEIDA Silver Tray (as you know, if it has little feet it would be properly called a Salver). It is definitely Silverplated and dates ca 1935 - 1965. The initials OL stand for "Oneida Ltd.", which has been their official name since 1935.

These are marked by MICHAEL PLUMMER, who worked in Sheffield (UK), ca 1770s - 1790s. You will find this mark using our INITIALS SEARCH.  The Crown symbol is the Sheffield Assay Hallmark - see our "Recognizing Country Hallmarks" page through our EXTRA HELP section.

Your elegant Silverplated Desk Set was made by THE PAIRPOINT Corp., New Bedford, MA, USA. This particualr mark was used by this company on Sheffield Reproductions [or in the style of] and dates ca 1880s - 1900.

This is one of the marks used by FREDERICK W. SPANGENBERG, a Fine Retailers & Importers of Silver Tableware, Jewelry & Watches or Clocks, located in Kingston, ON, Canada.

They also maintained some light manufacturing at their premises, mostly decorating blanks, but the vast majority of their items were either made to order by various factories in the US and UK (including Sheffield) or were selected from wholesalers' catalogues. They were in operation around 1870s to very early 20thC (exact dates are unknown, but they seem to have closed ca 1909 or so).

"Orfevrerie" literally means "Goldsmith" in French, and is the general term still in use and as marked on any Metalware, including Silver or Silverplated items.

H. BEARD, located in Montreaux (France), was a Distributor of Hotel & Restaurant Ware, mostly Silverplate & Chinaware of high quality. They do not appear to be in business at present and most examples we can find date ca 1920s - 1960s.

To use our huge database of Silver & Jewelry makers' marks and hallmarks, including marks on other Precious metals, Pewter and other collectible Metalware, please see our Silver & Jewelry or Pewter Marks Identification Guides. 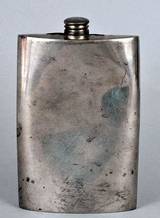 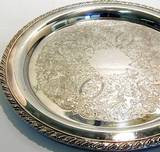