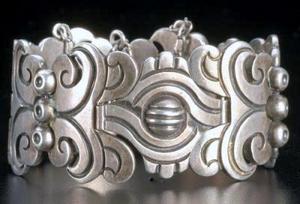 TAXCO SILVER has remained a very desirable collectible for almost a century. In particular, and although many silversmiths in the area produced some SILVER HOLLOWWARE, it was mostly MEXICAN JEWELRY from this region that became the main force behind the growth of so many artisans and studios who moved there and set up shops, also called Talleres in Spanish. As known, Taxco is a city located in the southern part of Mexico within the state of Guerrero. Silver mining and related activities was a major source of income for centuries for the local residents, with silver & jewelry tourism developing around early 20thC and continuing to this day. Most silver & jewelry produced in Taxco was either purchased locally by numerous American tourists that visit the area frequently or were heavily exported to the US. The well-known Sanborn's chain of stores, having locations throughout Mexico and catering mostly to American souvenir hunters, has played a very important role in distributing and reselling Taxco Jewelry & Silver for several decades.

Mexican Silver & Jewelry is usually clearly marked, but in reality, hallmarking standards in Mexico were not enforced rigorously. The notation "Sterling" (in English) along with the number 925 or 960 as the case may be as to its pure silver content in thousands, is a frequent marking on Jewelry since early 20thC. In most cases, the place of origin is also marked as in Hecho in Mexico (means Made in Mexico) or simply MEXICO. In the case of Taxco Silver, the word TAXCO was also included, especially after 1930s when the region had by then become famous for its high-quality jewelry. During certain periods starting ca 1950s, we also see the traditional Mexican Eagle mark, in two formats, with a number on its chest indicating either the city of origin or the registration number of the Artisan or Studio that used it as a Copyright symbol to confirm his or her identity as the maker and/or designer. Around late 1970s, the Eagle mark was replaced with an Initials + Number mark, for example TC-22, which indicates the initial letter of the place and the initial letter of the name of each Artisan, along with a sequential registration number based on when this mark was filed with the authorities. Some examples of common city initials include the following: T for Taxco, M for Mexico City, and C for Cuernavaca. To research marks & hallmarks used in Mexico and elsewhere, please see our Silver & Jewelry marks guides.

The vast majority of Taxco Silver items or Jewelry were made using Sterling Silver. In general, it is quite rare to encounter silverplated items from Mexico. Sterling Silver in Mexican jewelry ranged from 900 to 980 in pure silver content as expressed in the thousands scale and items were marked accordingly and most often accurately. The most common assay mark is for 925, especially since 1950s onwards.

A very prolific designer who moved to Taxco early on, in mid-1920s, was WILLIAM SPRATLING [b.1900 - d.1967], an American who lectured at the local University on Colonial Architecture and was soon consumed by the local art scene and became one of the most famous designers of his era. He mainly designed and crafted Silver & Jewelry, but also other decorative objects, including furniture. Many of his designs incorporate local ethnic images or culture, that include some inspiration from his travels to other previously Tribal places, such as Alaska, and are nowadays extremely collectible and fetch high prices at auction.

Another famous designer, MARGOT de TAXCO, also an American and whose real name was Margot van Voorhies Carr, migrated to Mexico in the late 1930s. Originally teaming up with (and marrying) Antonio Castillo of LOS CASTILLOS Silver Studios, she later branched out on her own, around mid-1950s, and continued to design some of the most stunning Jewelry and Silver decorative objects from the region, with heavy Mayan influences and almost three-dimensional appeal. Her works are appraised very high these days and have become very collectible.

There were over 200 individual Artisan Studios that operated in Taxco over the last 100 or so years and many continue to this day, although some of the very recent examples seem to be somewhat mass-produced to capitalize on the tourist trade. The most valuable and collectible Jewelry & Silver from Taxco, or Mexico in general, are examples made between 1920s to 1980s. Collectible silversmiths & jewelers from Taxco of that period include: Antonio Pineda, Bernice I. Goodspeed, Damasco Callegos, Emilia Castillo, Emma Melendez, Hector Aguilar, Citlal Castillo (founder of LOS CASTILLOS Workshop), Jorge 'Chato' Castillo, Los Ballesteros and many others.

A Group of Antique and Vintage Jewelry, including a rose gold...

A Mexican silver bracelet, Hector Aguilar
together with a... NINE ARTICLES OF TAXCO SILVER JEWELRY, including a two pairs of... FIVE PIECES OF TAXCO SILVER AND ABALONE JEWELRY including a leaf...