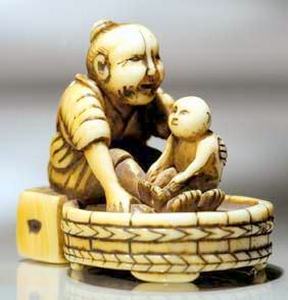 NETSUKE first appeared as early as the 14thC in Japan and were strictly utilitarian items to hold a small pouch or case that could be fastened to a wrap-around sash, properly called the obi, on old-styled Kimonos that actually had no pockets. This small pouch or case was used to carry personal items, such as medicine, tobacco and other little objects. It was held by a thick cord, whose other end was attached to a Netsuke and firmly tucked between the obi and the kimono, with the pouch or case hanging at one's side.

Original netsuke were made in simple oblong shapes, mostly out of ordinary wood or bamboo root. In fact, the term Netsuke, used the same in both its singular and plural form, comes from the Japanese words for "fasten" and "root". As it evolved from a purely useful garment accessory to a fashion statement, netsuke became significantly more intricate in design and use of materials. Finely detailed miniature carvings on special woods began being produced in large numbers, originally by wood carvers of masks using scraps that remained at the end of the working day. Ivory netsuke were first made by makers of musical instruments and quickly became very popular with those that could afford them. These special and very expertly decorated netsuke are now regarded as a proper form of Japanese OKIMONO, i.e. an ornament for display, and gradually expanded their original purpose by transforming to some sort of jewelry adorned by men and women alike, often wearing them in dangling clusters meant to impress others.

Collecting netsuke requires extensive knowledge of the Japanese art forms of the past and related symbolism, but most importantly it is essential that one can recognize materials. Because of the dramatic increase in prices for truly antique or vintage netsuke, many have been recently reproduced in huge numbers, but made of resin. These resin fakes, while pretending to be ivory, are practically worthless to serious netsuke collectors and have no artistic value whatsoever as they are fused using mass production molds at an industrial setting, whereas original and authentic netsuke were hand-carved meticulously and with great skill. Similarly for netsuke made of artificially aged wood that are hurriedly carved by groups of low-skilled workers in under-developed regions.

In addition to their differences based on the various materials used in making them, there are distinct types of netsuke that are classified based on their functionality and decorative features. Related categories for these various types include KATABORI, MANJU, KAGAMIBUTA, RYUSA, HAKO, SASHI, ICHIRAKU and others. Some are quite explicit, and along with whimsical ones, are very popular with collectors, if indeed authentic and antique. Most intricate and highly desirable nestuke found in the antiques market today date from around the late part of 18thC to early 20thC, while prior specimens can be admired mainly in Museums or very fine private collections.