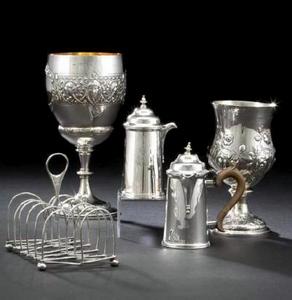 The best way to confirm if a particular silver antique could be referred to as Georgian is to look up its maker's marks & hallmarks. For example, using the information provided in our Silver & Jewelry Marks Guides, you can pinpoint the exact time-frame that an item was made and then determine whether "Georgian Silver" is the appropriate designation. As mentioned, "Georgian" primarily refers to English Silver of the period, but some collectors have erroneously expanded the use of this term to apply to silverware made in other countries around the same time.

During the Georgian period, silver hollowware & silverware came in many decorative forms, most prominent of which are the ROCOCO STYLE, NEO-CLASSICAL STYLE, ADAM STYLE, REGENCY STYLE, and GOTHIC REVIVAL STYLE. Most antique silver pieces are characterized by specific design elements that place them in each style category but may incorporate a mix that renders them slightly harder to tell. In this particular case, all of the aforementioned styles tend to employ elaborate details when it comes to antique silver, with special artisan and silversmithing techniques that enhance their overall look and it is often nearly impossible to distinguish them with any degree of certainty.

Many examples of Georgian Silver are shown below. These are from our Antiques Price Guides and can help in appraising your own antique Silver treasures or collectibles.

In addition to the usual Silver Tableware, such Tea Pots or Kettles, Silver Serving Dishes or Platters & Trays, Silver Tureens and the like, many items were of utilitarian nature. These may include Candlesticks & Candelabra, Silver Utensils, Goblets (some as Glass or Crystal Overlay), Silver Cruets, and of course Silverware & Cutlery. Yet, the majority of these are elegantly decorated and are nowadays very collectible, often because of their sheer beauty and sterling silver content rather than their usefulness.

Because Georgian Silver is synonymous with a period prior to the invention of any serious industrial silver-plating methods (e.g. Electroplating, a.k.a. "EPNS"), the largest percentage of Georgian Silver found today in the secondary antiques market are in Sterling Silver. They should all be appropriately marked according to the Assay or Standards Hallmarks as regulated by the UK government of the time. Sheffield Plating was the only practical way to plate silver during the Georgian era, which nevertheless was still fairly laborious and costly, but still less expensive than Fine or Sterling Silver. For more on Silver and how it was made, please see some of our articles here.

English Georgian Silver also became the main inspiration of design forms and styles for American Silversmiths when this profession was still in its infancy this side of the pond. Although most American silver of the time and before mid-19thC was Coin Silver, their output was second to none in terms of quality and these pieces are even more desirable by collectors as they were especially rare, such as items made by PAUL REVERE in Boston, MA. Almost all American silver antiques from that period used pseudomarks that were in imitation to authentic British Hallmarks in order to gain market acceptance. Since this was not illegal as there were no official Silver Hallmarking Standards in the US, these marks can be challenging in deciphering and one needs to use caution because some of these same marks were also used on ordinary Silverplate elsewhere.

Prices of antique Georgian Silver have escalated dramatically during the past decade, mostly because of their Sterling Silver content, which has appreciated significantly since the financial and banking crisis. Like all other precious metals, antique sterling silver seems to have increased in value at an unprecedented rate and is considered to be a good and solid investment. When this inherent worth as a precious metal is coupled with their strong aesthetic appeal, Georgian Silver antiques are easily considered as very desirable collectibles. Georgian Silverplated antiques are also very popular with collectors, in this case mostly because of their beautiful designs and careful workmanship since the vast majority were made by hand, one at a time. This is especially true if their maker is clearly marked on each piece and is also well known and documented.

Oval Georgian silver dish, chased with a band of flowers on...

Georgian silver snuff box, Birmingham 1810, together with a silver...

Circular Georgian silver pillbox and lid, chased with a crown and...

Pair of Georgian silver candlesnuffers with hinged blade and...