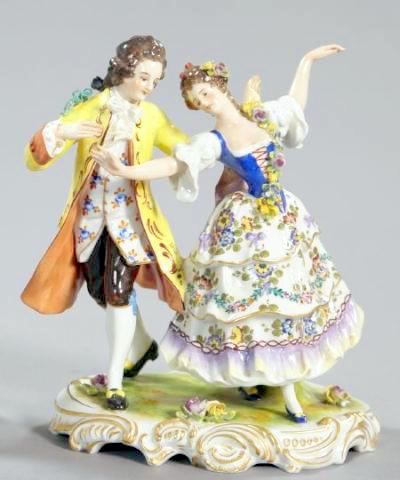 DRESDEN is a town located near Meissen (Germany) and is well-known for its myriad of Porcelain Decorating Workshops & Studios since the mid-18thC. Within a few years after the main Royal Porcelain Factory in Meissen opened its doors ca 1710s, producing some of the finest and definitely the very first European specimens in porcelain, several artisans from various parts of the country flocked to the area to add their significant contribution in decorating figurines and other objects. In addition to the plentiful resources of the region such as Kaolin (white clay), wood and water that are essential in making porcelain, most studios were able to purchase blanks directly from Meissen to use as stock. This reduced the cost of producing their own prime material and enabled them to concentrate on the decorative aspects of each piece, which required smaller premises. For these reasons, these decorating activities consisted mostly of hand-painting porcelain figurines or tableware, but also in making small bits of porcelain (hats, small animals, flowers, handles etc) to attach to the original blanks to enhance their appeal.

At first, kilns were small and the output quite limited for these studios, but that did not detract from the creativity and immense talent of their artisans. In fact, many worked primarily at Meissen during the day and supplemented their income by helping at these workshops. As a consequence, the quality of their items was almost equal in workmanship and detail to those made at Meissen but were usually smaller in size. The invention of the so-called Dresden Lace (cloth dipped in liquid porcelain and then set in a kiln) was a proud outcome of their efforts to expand on the then known techniques and create some remarkable examples of porcelain masterpieces, still staunchly admired to this date by many collectors.

By the mid 19thC and as the popularity of porcelain increased and rapidly became more affordable for clients that did not necessarily come from the noble classes of society, there were more and more of these studios that established operations in the area. Larger firms dedicated to decorating porcelain and not in direct competition with Meissen’s magnificent masterpieces now found ample fertile ground in making, selling and even out-right exporting beautiful and cute porcelain figurines & tableware by the thousands, especially to America, which by then had become the largest and profoundly most insatiable market destination.

The style applied by practically all these Dresden studios followed closely in the footsteps of the prevailing trends set at Meissen at the time. Very few deviations can be observed by some larger firms and those are usually subtle. The vast majority of these workshops, not only in Dresden, but also in other regions such as Bavaria or Volkstedt and Berlin (KPM), and even further in Austria, that by now has established their own industry of porcelain production, felt that Meissen’s examples were by far the most popular and knew they had a winning formula to conquer the prevailing tastes of their clientele. This of course slowly changed when younger artisans or newer companies entered the fray, but an evolution to their style was apparent mainly in the use of new glazes, softer or more variant color palette and fashion accessories or dress that adorned their pieces.

In addition to the Meissen styles being meticulously imitated by practically all Dresden porcelain studios, there were also countless deliberate efforts in copying Meissen’s original maker’s marks & logos. This obviously greatly aided in their marketing attempts but also implied an unspoken alignment with Meissen’s quality and methods. Although this was somewhat accurate to an extent since most blanks were supplied by them and many of their artisans also worked there, some marks used by the various independent workshops were remarkably similar to the famous Meissen’s crossed swords or they blatantly used the word Meissen on their products. Meissen prosecuted the use of their trademarks by others by various legal means, but most studios continued using variations that were borderline different and thus acceptable in the eyes of the law. For an interesting article on this topic, please see PORCELAIN MARKS FROM MEISSEN & DRESDEN.

To identify makers’ marks and read more on the numerous Dresden companies and also learn how to authenticate original Dresden pieces from recent Asian imports or reproductions, please see our Ceramics marks guides. Below are several examples of Dresden porcelain items from our Antiques & Collectibles Pricing Guides.

391. A Lot Of Dresden Porcelain Plates Cups And Saucers

A SET OF 11 GERMAN DRESDEN PORCELAIN PLACECARDS, with cartouche of...

A SET OF 12 SCHUMANN BAVARIA PORCELAIN PLATES, in the Dresden...

A pair of Royal Dresden figural groups, the first modelled as a...

TRIPOD CANE. The tip and the handle unscrew to reveal a 31" tripod...

718. A Group of Various Fancy Plates by Balmoral China, English,...