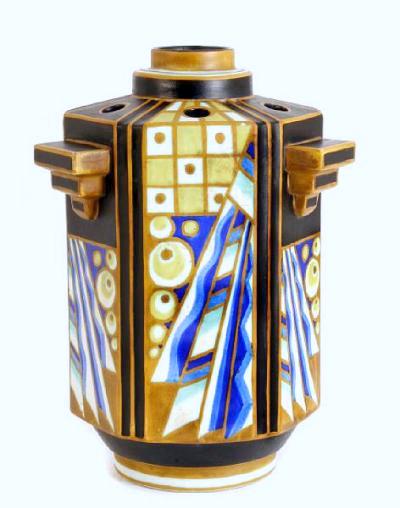 ART DECO is essentially a decorative style that first appeared around 1900 and grew to full force around late-1910s, dominating the Decorative Arts until about the mid-1940s. Its presence permeated several aspects of art, architecture, industrial design, fashion and all sorts of crafts, including making its distinct mark on Porcelain, Pottery, and Chinaware. It is characterized by its use of mostly straight lines or symmetrical shapes and of employing primarily strong and solid colors, thus forming striking bold visual motifs.

The Art Deco style can be said to be in vivid contrast to the free-flowing Art Nouveau aesthetic movement that appeared on the scene a few decades earlier. It is also regarded as the most likely forerunner of Modernism that had its peak in the 1950s – 1960s. Although this timeline suggests a general indication as to the predominance of each style, in reality, all of these decorative styles co-existed and overlapped, sometimes even combined to some extent with some examples and are still apparent in all walks of life to this date. Basically, most artisans and designers in Europe & USA gave emphasis to one or the other based on their clientele and other factors so as to follow current trends. Very few were strict adherents to any particular style, and those consisted primarily of a few studios or ateliers or individual modelers scattered in Central Europe and France.

The epitome in the application of the Art Deco style in Decorative Arts is the Vienna Workshop [Wiener Werkstätte]. Established in 1903, it employed several master designers & modelers that were true and absolute proponents of this genre. Well before finally closing its doors in 1932, this industrious studio had already managed to become one of the most prolific and enthusiastic producers of items in the Art Deco style on all kinds of avenues, including Interior Design, Textiles, Fine Art Paintings, Metalware, Silver & Jewelry, Porcelain & Chinaware, Glass & Crystal, and even Woodwork and Mixed Media. For more on this studio, please see our article on The Vienna Workshops - Wiener Werkstätte.

In other regions of the world and specifically in Great Britain for Porcelain, Tableware, or Pottery, the most notable examples of companies full-heartedly adopting the Art Deco style, at least for a period, include Royal Doulton, Minton, Copeland-Spode, Worcester Royal Porcelain, Carlton Ware by Wiltshaw & Robinson, Crown Devon [aka S. Fielding & Co.], John Beswick and many others, but to a lesser extent. To identify makers’ marks and read more on each company, please see our Ceramics marks guides.

Below are several examples of Art Deco items from our Antiques & Collectibles Pricing Guides.

481. An Art Deco Sporrong and Company Pendant by Tore Strindberg...

492. An Art Deco Sterling Silver And Enamel Necklace And...

665. A Ladies' Art Deco Style Ring with Diamonds and Sapphires