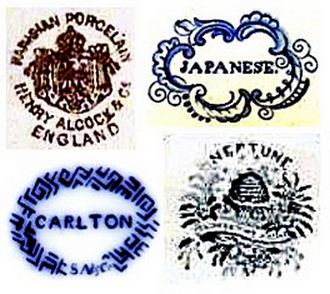 Identifying Staffordshire pottery made by various kilns owned by the Alcock family can be quite a challenge as their marks & backstamps varied frequently over the years. Additionally, each family member signed their wares with distinct marks that did not always include the initials or family name. In those cases, Alcock pottery marks, especially on tableware & earthenware, were simply an embellished outline that contained the pattern or series name.

For this reason, many Staffordshire Alcock Pottery items are not identified properly and remain unattributed for most collectors. Furthermore, because these unidentified pieces can be really valuable sleepers, if not rare, examples from the heyday and peak production by the Alcock potteries are lost in the shuffle of items that are generically classified as "Staffordshire" referring to their regional designation of origin and from a period that can be determined only approximately at best.

Careful research for Alcock pottery marks is the first step in appraising values. To read an in-depth interesting article that can give you a renewed appreciation of one of the most prominent members of this family, see: Staffordshire Pottery by Samuel Alcock

To view a comprehensive list of Alcock Pottery Staffordshire marks, please check out our marks4ceramics research service to help you in recognizing how they changed over the years, which in turn can point to a more accurate age of your collection.

To compare with other known Staffordshire Alcock Pottery & Earthenware examples in order to arrive at a fair estimate of their appraisal value, check out our values4antiques with millions of illustrated priced results for any and all types of antiques & collectibles. Some typical examples are shown below.

Some key facts on the two main Alcock families' Staffordshire potteries and how they evolved:

A selection of 19th century china, to include a Samuel Alcock...

Collection of china and glass including two brown decorated plates...

A VICTORIAN STAFFORDSHIRE PORCELAIN FIGURE modelled as a seated...

A Victorian Ridgway stoneware Jug moulded warriors on horseback on...

After B. Kate Alcock. Portrait, girl's head, looking to sinister,...

A STAFFORDSHIRE MINIATURE MODEL OF A COW, POSSIBLY SAMUEL ALCOCK...

A SAMUEL ALCOCK MODEL OF A HOUND, sponged with feathery liver...