Price guides for Three Japanese wooden netsuke carved as a...

Appraise and find values for
Three Japanese wooden netsuke carved as a... 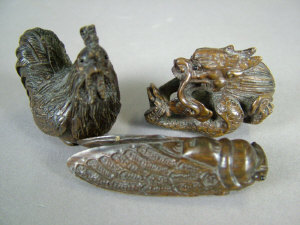 Three Japanese wooden netsuke carved as a locust, a dragon, and a chicken, height, 4.5cm, and smaller, (3). Plus Vat on hammer price... [this item is NOT for sale]