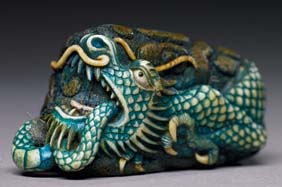 STAG ANTLER NETSUKE BY SHAW Very finely carved, contemporary stag antler netsuke by Guy Shaw (British, 1957-2003), of a compact writhing dragon amid clouds,... [this item is NOT for sale]