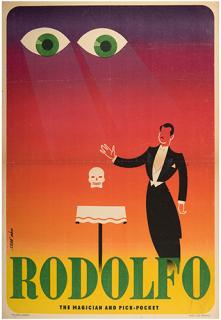 RODOLFO (REZSÖ GÅCS). Rodolfo The Magician and Pick Budapest: Kincs Litho., 1936. Two wide eyes stare down at a modernist portrait of the Hungarian magician... [this item is NOT for sale]