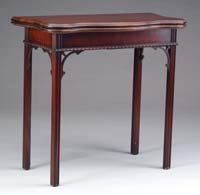 MAHOGANY CHIPPENDALE-STYLE CARD TABLE. Shaped fold-over square top on a base with gadrooned edge on molded square legs. Label on base “Imperial of Grand...