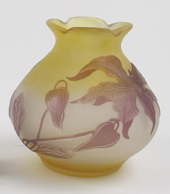 GALLE CAMEO GLASS VASE. The pale yellow field shading to grey, back to yellow at the base having light brown toned flowering clematis pattern, outward... [this item is NOT for sale]