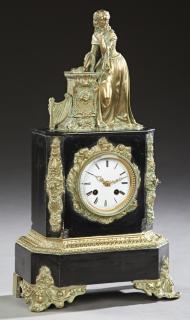 French Gilt Bronze and Black Marble Figural Mantel Clock, c. 1870, by Vincenti & Cie., with a surmount of a woman with a letter on a table, atop a canted... [this item is NOT for sale]