Price guides for Fourteen pieces of 19th century and later...

Appraise and find values for
Fourteen pieces of 19th century and later... 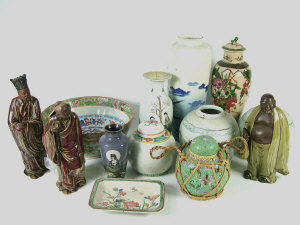 Fourteen pieces of 19th century and later Chinese ceramics, to include a famille rose bowl with butterfly and floral decoration, 27.5cm diameter, pair... [this item is NOT for sale]