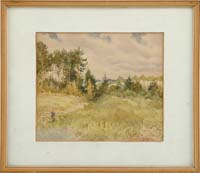 CHILDE HASSAM (American, 1859-1935) FIGURE IN A LANDSCAPE. Small watercolor scene shows a figure walking through a field with a central ravine with tall...