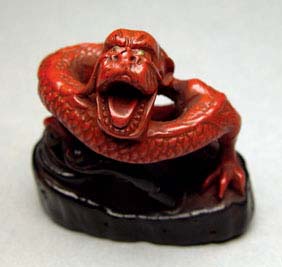 ANTIQUE LACQUER NETSUKE Antique, carved and lacquered wood netsuke of a red coiled dragon atop rockery, with inlaid eyes, signed Zeshin (?) on inlaid plaque,... [this item is NOT for sale]