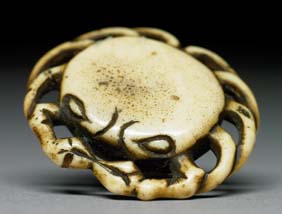 ANTIQUE ANTLER NETSUKE Antique carved antler netsuke of a stylized circular crab, its legs forming concentric circles around its body, 19th Century... [this item is NOT for sale]