Price guides for A selection of 19th century china, to include...

Appraise and find values for
A selection of 19th century china, to include... 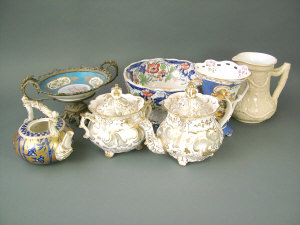 A selection of 19th century china, to include a Samuel Alcock style tea service, to include a tea pot, 17cm high, sugar bowl and cover, cream jug, slop... [this item is NOT for sale]