Price guides for A collection of Chinese ivory carvings, comprising...

Appraise and find values for
A collection of Chinese ivory carvings, comprising... 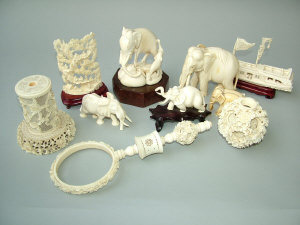 A collection of Chinese ivory carvings, comprising a puzzle ball on stand, height 38 cm, a ship, a rock with figures, and five elephants, (8), (a/f).... [this item is NOT for sale]