Price guides for A bronze equestrian group of two knights...

Appraise and find values for
A bronze equestrian group of two knights... 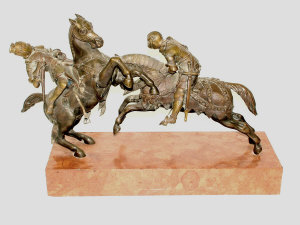 A bronze equestrian group of two knights in combat, on a rectangular pink marble base, length 59cm.... [this item is NOT for sale]