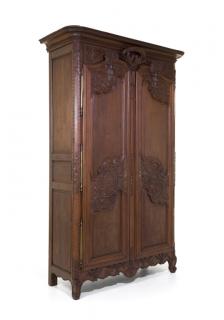 A LARGE 19TH CENTURY FRENCH PROVINCIAL WALNUT ARMOIRE Late 19th century, circa 1850 The armoire fitted with two carved doors opening to reveal shelves... [this item is NOT for sale]