Appraise and find values for
489. Illuminated Manuscript, 13th Century The... 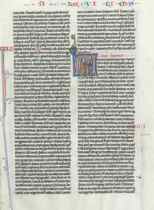 489. Illuminated Manuscript, 13th Century The best known book of the Middle Ages, the Latin Bible's text has survived almost word for word unchanged... [this item is NOT for sale]