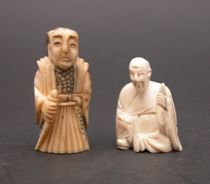 445. Japanese Netsukes Two small hand carved ivory netsukes. The first figure is of an old man wearing a traditional Japanese robe. In one hand he holds... [this item is NOT for sale]