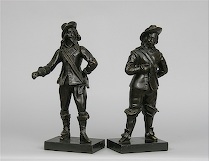 403. Pair of Bronze Cavalier Statues, ca. late 19th early 20th Century An attractive pair of cavaliers in bronze, wearing 17th Century attire; not... [this item is NOT for sale]