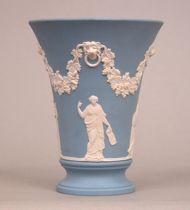 335. Wedgwood Jasperware Vase, 20th Century Proceeds from the sale of this item will be donated to the Lyric Opera, Cleveland. Durable unglazed stoneware....