Appraise and find values for
(lot of 3) Associated Staffordshire figurals,... 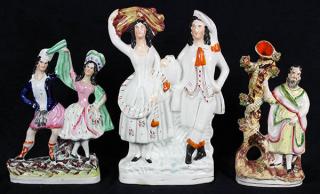