In a general and very brief sense, Modernism refers to an aesthetic movement that begun as a response to traditional forms of expression in the Arts & Culture. In western societies, its beginnings are generally thought to coincide with the Industrial Revolution of the late 19thC. It is generally characterized with a departure from Romanticism & Realism or Classicism that had remained the predominant veins of artistic thought ca 17thC onwards. Yet, at least in its initial forms, Modernism continued to incorporate practically the same themes and subjects, but in a more imaginative and free-flowing manner, often without regard to precision or scale.

These initial attempts of Modernism to break away from the mainstream Artistic Movements of the time were quickly surpassed with even more daring forms that include Abstract or Geometric elements around the start of 20thC. Although the very first such attempts of Modernist designs are observed primarily in numerous examples of early 20thC Fine Arts and to some extent in Furniture & Architecture, they quickly spread to the so-called Decorative Arts of ceramics, jewelry, and silver making. Suddenly, designs became practically void of any ornate detailing and at times practically purely functional, almost simple and utterly minimalist. In a way, Modernist designs enveloped and subsumed the overall item to express it as one total form with clean or all-encompassing edge lines, that serves a specific functional purpose and lacking in any unnecessary artistic excesses.

Particularly in Jewelry and Silver, where in most cases there is only one type of material that is used for the entire piece, employing Modernist aesthetic principles, renders it as one monotonic and continuous form or shape, yet very pleasing to the eye and instantly appreciated in its entirety as one total construct. Different angles of viewing only enhance this feeling and there is something almost indescribably mystical or soothing in the simplicity of these designs.

Historically, this movement reached its peak around 1930s – 1950s, when many jewelers & silversmiths recognized the increasing popularity of these patterns to both men and women, practically at the same time. At the risk of being politically incorrect, perhaps it is no stretch to imagine that this essentially instant acceptance of the Modernist style, was a unique sociological event when different perspectives of appreciating beauty merged for the two genders. For example, simpler and almost "manly" Modernist Jewelry, evolved as the crossroads of some sort of unisex appeal where a certain tamed approach of the very ornate detailing associated primarily with feminine designs, approached that of the pragmatic style adorned mostly by the opposite sex.

Our marks4silver section on our marks4antiques.com research website, includes the most complete and comprehensive reference library of makers’ marks and trademarks documented or registered by Modernist jewelers & silversmiths throughout the world.

It should be obvious to all serious collectors and dealers, but worth repeating, that correctly attributing the maker and age of Modernist jewelry & silverware are key to establishing their price. This is one case where the intrinsic value of the actual precious metal in these items is of lesser importance to the popularity of the designer. Famous designers fetch much more at auction or in exchanges between dealers. Some great designs, but made by obscure craftsmen also fair well at auction yet are not as easy to advertise or sell since it takes a more dedicated and knowledgeable collector to appreciate them. Mass produced Modernist designs of any kind are simply worth their weight in precious metal but could become more valuable in later times as interesting mementos of an era.

It is also important to note that many sellers represent several items as Modernist, which unfortunately are not. Most such examples include items made in Mexico, which although are highly desirable in their own right, they often symbolize Aztec or Mayan historical themes and shapes. These appear to be almost Modernist at first sight, mainly because of their geometric forms but are not related to the often convoluted and intertwined shapes observed for true designs in the Modernist style. The same applies to Native-American (a.k.a. American-Indian or Southwest) jewelry, which is steeped in tradition and tribal references with remarkable similarity to modernist designs. But again, these are desirable for other reasons and should not be referred to as Modernist per se. However, there are some exceptions as some designers, for example, PINEDA, SIGI and others, who often deviated from the traditional Mexican style and created magnificent silverware & modernist tableware in the contemporary manner. 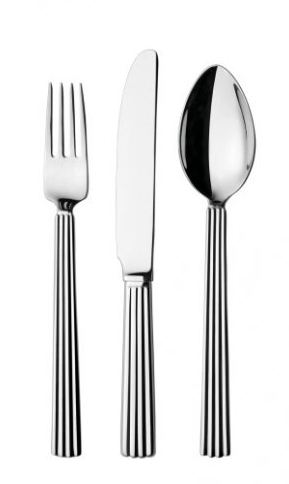