Yes, this Presentation or Souvenir Spoon is indeed a Dutch item and was made by H. HOOYKAAS - SCHOONHOVEN SILBER FABRIK, located in Schoonhoven, Holland. It dates ca 1900 - 1940s.

TUDRIC is a Trademark used by LIBERTY & Co., a famous Shop & Importers in London, UK, first opened in 1875. They closed ca late 1920s or early 1930s, and were pioneers and very instrumental in expanding the Arts & Crafts aesthetic movement, primarily through elegant imports in this style.

Their Pewter production, usually marked "Tudric", begun by commissioning most designs to Archibald Knox, a very famous Artist & Designer of the time. Your Tray dates ca 1903 - 1920s and is a fine example.

Your Silverplated Basket was made by a company now known as ROBERTS & BELK, Ltd., located in Sheffield, UK. They were originally established in 1809 and changed owners several times. Your item was made during the period when it was under Roberts & Briggs. The Registration Diamond mark would date your piece precisely; however, we cannot read all of the details around that mark in the photo to give you the precise Year. However, since the lowest cipher is the letter D, at least we know that it dates ca 1868 - 1883.

Here are some general comments on Flatware & Cutlery, which you help in answering your questions:

These are marked as follows:

This is NOT an INTERNATIONAL SILVER mark or logo. Also, although SEARS ROEBUCK had used a practically identical one and some other very similar marks on items made to order for them by several manufacturers, those marks occurred mostly on Flatware, so this is not the case either.

Instead, we believe that this fine Modernist Sterling Cordials Set was made by the THE STIEFF COMPANY, who were in close cooperation with - and eventually acquired in 1979 - the S. [Samuel] KIRK (& SON), Inc. They are now known as the KIRK STIEFF CORPORATION and are still in business in Baltimore, MA. S. KIRK and STIEFF were always very contemporary and pioneers in their designs. Your Set dates ca early 1950s.

As I am sure you already know, this is an ElectroPlated Nickel-Silver [EPNS] English Sugar Bowl. The LD (D in Capitals, but smaller) usually denotes Ltd on most similar marks and somehow transcends order, so the initials would actually read W.C. Ltd., if read properly. This particular mark and in this exact format was used only by W. COULTHARD & Co., Ltd., silversmiths & Retailers, located in Birmingham (UK), ca 1890s - 1920s.

This Pitcher is Electroplated was sold by the ENGLISH SILVER MFG Corp. They were located near Boston, MA (USA) and established in the 1950s. They seem to have closed in the late 1970s. They made and imported mostly electroplated items and sold them through Department Stores. They were also Distributors for the LEONARD SILVER MFG. Co. for five years, ca late 1960s - 1970s. Your Pitcher dates ca 1960s.

To use our huge database of Silver & Jewelry makers' marks and hallmarks, including marks on other Precious metals, Pewter and other collectible Metalware, please see our Silver & Jewelry or Pewter Marks Identification Guides. 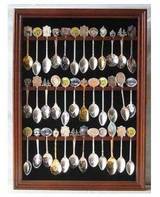 A set of Souvenir Silver Spoons on display