Your large Bisque Figurines are marked with the impressed initials of a relatively obscure, but important PARIS PORCELAIN studio that was located on Rue des Gresillons. It so happens that this street changed names in 1837 to Rue de Laborde, so the new name has also been associated with this studio by some historians but both refer to the same address. Please note that these initials have also been copied on more recent reproductions, so you may want to consider any known history of your piece (provenance) to determine whether this particular mark on your two lovely figurines is authentic or not. This same mark also appears in underglaze blue, but is quite rare.

This particular Paris atelier had many owners, who in turn employed various artisans & modelers, most of whom are now relatively unknown primarily because they all worked for very short periods of time during rapidly successive proprietors that took over this small factory. They seem to have first been opened in late 17thC and finally closed sometime around 1837. The two most important names linked to this atelier are Pierre Simon Jullien (the founder) and Victor Desire Margaine (the last owner). They were known to have produced very elegant Chinaware Sets & large Porcelain Centerpieces, including many items in Bisque such as Figurines, Compotes, Urns, mostly in the style of Jacob Petit. Some of their items are now exhibited at very fine Museums.

If you feel that yours are more recent, then the best and most general description for this lovely pair of tall Bisque Figurines is that they are "Continental", most likely from France or Germany. As you probably already know, many of these have been reproduced as very accurate copies of older Paris Porcelain specimens, but a bit later and especially ca end of 19thC and some even more recently.

You can also use our Price Guides to search for "Bisque Figurines Pair" and find hundreds of similar items to determine their value in today's antiques market.

This mark is included in our database under the "PEOPLE" Shape Category.  It is listed as POWELL, BISHOP & STONER - ca 1880 - 1939. They were located in Hanley, Staffordshire, UK. This particular trademark was first registered in 1880 and was used until they closed along with a few other marks, most including their initials P.B. & S. This Pottery was formerly known as Powell & Bishop, ca 1876 - 1878, but used entirely different marks. They made Chinaware & Earthenware.

These initials were used by the British Potter SYLVIA H. DAVEY, daughter of John Davey. Her studio was known as Old Bridge Pottery located at Bridge of Dee, Castle Douglas, Kirkcudbrightshire (ca 1960s - 1976) and then it was renamed to Davey Pottery at the same address.

She is known for her thrown & handbuilt domestic and decorative earthenware or stoneware, and also sculptural pieces & garden sculptures. She used at least 3 marks, all with the initials SD, two in a circle as separate letters, and another like on your piece, which dates ca 1975 - 1980.

The crescent and GJ initials are included in our database under at least the "MOON, GLOBE, SUN etc" Shape Category and are listed as GEORGE JONES, Staffordshire, UK. Although this company was originally established in 1864, it was renamed to "Crescent Pottery" in 1907 and then closed in 1951.

The name of your Pattern is SWANSEA - ANTIQUE, and there are several similar Patterns referred to as "Old Swansea". This mark was used by George Jones mainly ca 1874 - 1924, and since it includes the country of origin (required only after 1891), your Sets were made ca 1890s - 1924.

This is a re-issue of the original mark used by Gladding, McBean & Co. ca 1939 - 1947. As you probably know, this company was purchased by Interpace Corp. in 1962 (USA) and later in 1979 by WEDGWOOD (UK). It was during that later period that some of the Franciscan Ware were made in England at Wedgwood's premises, hence the "Made in England" below the mark. This dates your item to ca 1979 - 1986, as this Division was dissolved after that time and these Patterns ceased to be made.

As you know, "Franciscan Ware" is a generic tradename for a number of Series of Patterns made by these companies over the years, most famously the Apple, Desert Rose, Ivy and many others.

This mark was used by JON FISHER, a London based Studio Potter & Artist, having his Studio on Davies Rd since 1990. This incised mark was the first one he used and has adopted others, some similar and some with just his first name, Jon. He still produces Earthenware to this day and is known mostly for his Slip decorated and reduced Stoneware creations. Your lovely piece dates ca 1990 - 1997.

Although your photos are out-of-focus and blurred, we can recognize this mark as a generic ca 1960s - 1970s Porcelain Decorating Studio, located in Limoges, France. They make mostly giftware and souvenirs. Most of their items are purchased as blanks from nearby Porcelain Factories and are decorated by hand.

This particular mark was used by LANCASTER & SONS, Ltd., ca 1920s. They were located in Hanley, Staffordshire (UK), established in 1900 and then changed name to Lancaster & Sandland Ltd in 1944. They are still in operation today. "English Ware" is the particular Series or Pattern for this lovely Cake-Stand.

The maker is ENOCH WOODS & SONS and they were the only Pottery in the UK that produced this Pattern named DARTMOUTH, which further confirms this attribution.

As you know Enoch Woods & Sons was part of a long line of Potteries preceded and succeeded by other "Wood(s)" family members. This particular Enoch Pottery was located in Fountain Place, Burslem, Staffordshire (UK), and was in operation from 1784 to 1792 only, which dates your piece fairly accurately. It was preceded by Wood & Clarke and succeeded by Wood & Caldwell.  They made mostly Earthenware, Basalts, Cream wares and Porcelain.

They are known for Handbuilt, Pressed & Moulded High-Fired white Earthenware & Porcelain. Also, Terra Sigillata.  Most decorative themes resemble animals & nature. Surfaces are usually Pearly Luster.  The logo on your piece dates ca 1970s onwards and since it contains the letter R, it must be Ruth's.


To use our huge database of Pottery & Porcelain marks, including marks on Ceramics of all types, please see our Ceramics Marks Identification service. 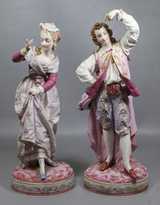 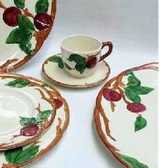