Your Limoges vase is marked by Martial Redon, who was involved in the Porcelain business since the 1850s as part of the GIBUS & REDON company. However, marks that are attributed to Martial Redon only begun to be used ca 1880s when Gibus left the company. Redon died in 1890, but the company and use of their marks were continued by his son until 1896. The company was then acquired by BARNY & RIGONI, also located in Limoges, France.

Yes, this mark reads PB DELFT, which stands for PlateelBakkerij Delft. It was founded in 1897 by several merchants from Amsterdam and nearby towns and made accurate reproductions of older 17thC pieces in the distinct Delft style. They are still in business.

Their pieces are very desirable with Delft-ware collectors because of their high quality and accuracy of design reflecting the old masters. The initials below the triangle and to the left are those of the Artisan that actually decorated this masterpiece. On the right side and again below the triangle, is the Date cipher (letter D) of when it was made, which in this case corresponds to 1906. This is a truly fantastic and fairly rare piece and you are very lucky to have it!...

Your lovely hand-painted floral Limoges plate was made by the ROYAL LIMOGES factory as noted on the back. This factory has been in existence since 1797 and is still in business. Over the years, they have produced considerable quantities of Tableware & Decorative Porcelain or Chinaware for many notable companies, including some of the ones you mentioned. They are known mostly as Exporters and also for making White Ware (undecorated blanks). Many of these blanks are then decorated by one of several Studios "to order" (i.e. subcontracted). However, the vast majority of these blanks are purchased directly by many local Limoges Studios and other companies who then decorate them for sale independently.

Your particular example appears to have been made by and for Royal Limoges themselves, and was exported or sold to wholesalers by the same company. It dates ca 1910s - 1930s.

The complete text near the top of this mark should read "Royal Bayreuth", which is the trade name used by TETTAU PORCELAIN on items for export, especially those destined for the USA. You will find this mark under our "COATS OF ARMS" Shape Category, or use our NAME SEARCH for TETTAU. It dates ca 1902 - 1930s. Lovely and quite unusual textured Pitcher or Jug!!

Although a few companies used these initials, we've been able to narrow it down to either BISHOP & STONIER (ca 1891 - 1910) and who are listed as having produced a Pattern or Design by this name or BARKER & SON (ca 1850 - 1860), who however do not have this Pattern or Design registered (not all Patterns or Designs were registered and even less documented from those years, so this is not unusual).

In my opinion, the most likely maker is BARKER & SON ca 1850s because your item does not have the Country of Origin notation (required only after 1891). Also, its style is more of a ca mid-19thC example rather than later. As you know, this is usually referred to as FLOW-BLUE pattern and yours is exceptionally high quality and unique with all its Gilt accents and extra decorative detailing.

You have a fairly rare example of Studio Pottery or Earthenware made by Jos. Ant. HUSSL. His Studio was located in Schwaz, Austria, hence the impressed name of this town on your piece. He is known to have established his workshop as early as 1801. Very little is known of this Artist, but it appears that his work was continued by his family until ca 1880s.

According to our reference resources, the majority of their items were in the "Oriental and Renaissance styles" with hand painted details and extensive use of enamels. Yours is clearly in the Oriental style and very desirable. This mark is actually included in our database under the "A" Shape category or use our NAME SEARCH for HUSSL to view it faster and read a brief Fact Sheet on the company.  Stunning and unusual, you are very fortunate to have such an eclectic grandmother and even more lucky that she passed it down to you!...

ORIVIT refers to a metal alloy used by a company by the same name, renowned for their luxury and high quality Decorative items, made in various materials, including Silver and Pewter, or as overlay to Glass or Porcelain pieces.

Because most of their items are regarded as Metalware, you will find a reference to this mark in our Jewelry & Silver Marks Guides. In the particular case of your item, you are probably correct that this is a Ceramic piece and the overlay is this Orivit alloy, which in fact consists of 89.85% Pewter, 7.9% Antimony, 1.9% Copper, and 0.12% Silver.

In general, this company begun ca 1880s in Cologne, Germany, and created this alloy for use with decorative items in the 1890s. In early 20thC (ca 1904 or so), it run into financial difficulties and merged with another similar company called OSIRIS. Unfortunately, this was not sufficient to avoid total collapse, and both were soon acquired by WMF in 1906. Because of this, items marked with the ORIVIT logo were made during a very brief period (ca 1890s - 1906) and are very desirable with collectors. You are very lucky to have such a beautiful example!...

The mark reads "PILIVITE" near the top, which is a trade name on Cookware made by A. PILLIVUYT & FFILS on exports to the UK and USA.  APILCO was yet another trade or brand name used by the same company since the late 19thC.

However, in 1935, the DESHOULIERES GROUP, who were also famous for their Cookware and related products since 1826, purchased the name APILCO from A. Pillivuyt and begun using it on products that were partly made at Chauvigny (one of their main factory locations about 50 or so miles west of Limoges) and finished and/or marketed by A. PILLIVUYT & FILS. As you know, A. PILLIVUYT & FILS, was a separate company (established in 1818 in Limoges) and produced similar wares. This particular mark was used on items made ca 1935 - 1960s, which dates your piece.

Please note that APILCO and A. PILLIVUYT items are regarded as some of the best in the industry for professional chefs. Also, "A Feu" literally means "Fired", a reference to the fact that these items were fired at a Kiln at high temperatures to achieve long lasting non-porous surfaces that can withstand demanding use, such as in a professional kitchen.

The style of this lovely small pottery vase is in the distinct style of the Bauhaus Pottery that was founded in 1920 by Max Krehan in Dornburg (Weimar, Germany), initially as a pottery workshop to teach students and hone their talent. Although very short-lived (closed in 1933), its simple, yet innovative approach to artistic pottery, became a major influence to many, especially Scandinavian artisans, which is probably why you felt that it may have originated from there. I believe yours to be a recent example in the Bauhaus style and perhaps the number 74 denotes the year it was made (as in 1974).

Although small, it has been professionally executed and the sponge-like effect on its surface and smooth glaze indicate an experienced Potter. Original and early Bauhaus Pottery pieces seem to be very desirable with collectors.


To use our huge database of Pottery & Porcelain marks, including marks on Ceramics of all types, please see our Ceramics Marks Identification service. 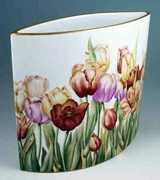 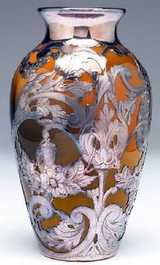